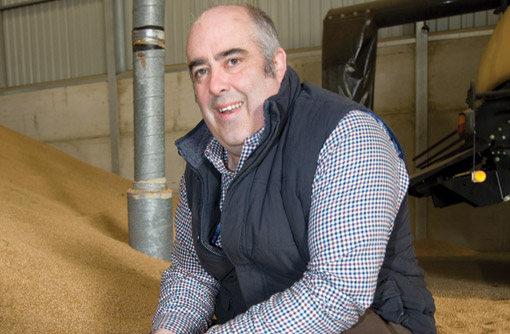 One of our barometer farmers is relieved that he sold some of his winter barley forward this season as grain prices continue to fall.

Nottinghamshire grower Graham McIntyre has so far seen 900t of this year’s crop disappear down the drive in lorries at a good price, agreed ahead of harvest.

Mr McIntyre says that the farm is £40/t better off when compared with the current price for winter barley and he is concerned about where the prices are heading.

“It is dropping quite quickly, so we are going to sit tight and see what happens before selling any more grain,” he explains.

The farm has now completed harvesting its 160ha of winter barley, which has been a combination of the varieties Cassia, Volume and for the first time this year – Meridian.

Overall yield has been around 8t/ha, with a specific weight of between 67-69kg/hl, with the new variety matching the two tried and tested ones on the farm.

Mr McIntyre has also cut 100ha of his Gallant milling wheat on the sand land around the homestead Broomhill Grange, near Edwinstowe, which has yielded 7t/ha.

“That’s about average for our lighter land and quality has been OK, too. We have some oilseed rape and Santiago wheat ready on our land around Worksop, so will be moving there tonight (12 August),” he says.

The farm also grows around 60ha of sugar beet and after a late and slow start, Mr McIntyre says it has caught up well.

“We irrigated it through June and July and it’s now looking like it should get to our average of around 85t/ha when we start lifting later in the season,” he notes.