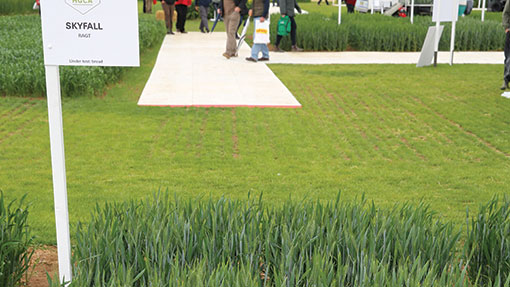 Interest in RAGT’s new Group 1 wheat, Skyfall, has been buoyed by a partnership approach to its introduction, involving every stage of the production chain.

As a result, major millers and bakers have already committed to the variety, while seed supplies are estimated to be sufficient for a 6% market share in 2014-15, Skyfall’s first commercial year.

Even without full approval from Nabim – it remains provisionally approved for another year and will undergo further testing this harvest – Skyfall appears to have already been given the green light by the industry, giving the much-needed confidence that new milling varieties need.

For ADM Milling, one of the largest flour millers in the UK, getting involved with promising varieties at an early stage means the company is able to adapt them to meet its customers’ requirements, allowing both parties to benefit from the plant breeding innovation that’s taking place, explains Mark Ringrose, ADM Milling’s trading manager.

“Our customers are showing much greater interest in wheat production and farm practice,” he says. “Getting the right links in place through strategic partnerships with plant breeders and farming groups means we can offer them relevant information and expertise.”

That early involvement is why ADM has been happy to put buyback contracts out for Skyfall for harvest 2015, through its ADM Connect growers club and “Field-to-Flour” initiative, he confirms. “We also contracted a significant volume in the autumn of 2013 so that we have commercial crops for this harvest and can continue our work with the variety.”

The fact that Skyfall offers both yield and grain quality, in a good agronomic package, makes it a step forward for growers, believes Mr Ringrose. “The extra yield will be an attraction and may even tempt some lapsed growers back to producing milling wheats.”

That’s a view shared by Jonathan Lane of Gleadell, who points out that Skyfall has the same yield as the country’s leading feed wheat, JB Diego.

“We’ve seen a decline in the milling wheat area and that’s predicted to continue into next year,” he reports. “But varieties such as Skyfall could change the situation and revitalise the Group 1 sector. With that yield potential, there’s a great opportunity at the farm level.”

New-crop milling premiums are currently about £30/t, adds Mr Lane. “My advice to any Skyfall growers is to secure a contract, treat it like a milling wheat and expect to get both the yield and the premium. It’s a different proposition to the other milling types.”

Lee Bennett of Openfield points out that if millers are getting excited about a variety, it’s a good omen.

“The millers may like its baking results, but growers will be interested in its extra yield. Also relevant is that fact it performs well on light land, as well as in the second wheat position.”

He predicts that Skyfall will take market share from existing Group 1s Solstice and Gallant, as well as having an effect on the Group 2 Cordiale area. “If you can grow quality wheats, you’re going to want to try some Skyfall.”

Consistency is a key requirement in any milling variety grown by Stephen Craggs, who is the current holder of the Nabim/HGCA Milling Wheat Challenge title and a member of the ADM Connect grower club and its Field-to-Flour initiative.

A sizeable investment in cleaning and gravity separation equipment, as well as an on-farm testing laboratory and his own transport fleet, means he is confident about every load of milling wheat that leaves his County Durham farm, regardless of what the crop has been subjected to by the north-east weather conditions.

“Consistency is at the heart of everything we do,” he says. “After all, it’s what the mills want.”

For the past eight years, Solstice has been his mainstay variety. Grown on a continuous wheat basis, it has done well in every season, outperforming more recent introductions and always in demand from the mills.

However, the opportunity to try some Skyfall and compare it to Solstice came from ADM Milling, who has been involved with the variety ever since it entered the testing system. So last autumn, Mr Craggs drilled a 24ha block of the new variety on 6 October in the second wheat position, to get a closer look.

“We’re treating it in exactly the same way,” he reports. “Solstice is showing some disease weakness now, so that’s an area of interest.”

Mr Craggs is looking for varieties that have the ability to produce more, with fewer inputs. “The Pch1 gene in Skyfall is supposed to help it scavenge the ground for nutrients and give the required protein level, using sensible nitrogen rates. Add that to its better disease resistance and we should be looking at a more cost-effective crop.”

To date, the Skyfall block is cleaner and shorter. “It’s not exceptional for disease resistance and the pressure has been very high. Our strategy is to keep disease out, rather than have to treat it.”

His view is that varieties such as Skyfall, with their easier management, could tempt growers back to quality wheats. “We don’t want to lose this market to imports.”

Essex grower Christopher Padfield and his farm manager Mark Tubby, also members of ADM Connect, have been waiting for a new milling variety with the genetic potential to offer a significant step forward.

For this reason, Skyfall is being evaluated at Codham Hall, to see whether it has a place on the 800ha farm near Brentwood, where quality wheats dominate.

“We’re not quick to change, but the chance to look at a new, higher-yielding variety is very relevant,” says Mr Padfield. “If it offers us both yield and grain quality, it will be a contender.”

The multigenic disease resistance in Skyfall will be needed in a high-pressure situation, he believes. “It is cleaner than our other milling varieties at this stage of the season and it does also offer orange wheat blossom midge [OWBM] resistance, which could be useful.”

Even so, new-generation SDHI fungicides have been applied at T1 and T2, reports Mr Tubby, who adds that the mild, wet conditions have warranted a robust fungicide programme across all varieties this year.

Skyfall’s faster development rate was evident in the spring, he says. “In general, crops are a week ahead of the norm, but Skyfall was the first to get going. It’s also greener.”

All the wheat crops at S&J Padfield and Partners are tested prior to harvest with a Minibatt sample harvester, which allows Mr Tubby to do a rapid in-field assessment of the wheat’s Hagberg and protein content, as well as moisture level.

“It gives us an indication of the crop’s quality, so we can segregate loads where necessary and meet the needs of the local ADM mill.”

He anticipates that the harvesting of Skyfall will take place after Gallant, but before Solstice. “The earlier-maturing varieties are better for our rotation, as we are often following wheat with oilseed rape. They also tend to have a marketing advantage.”