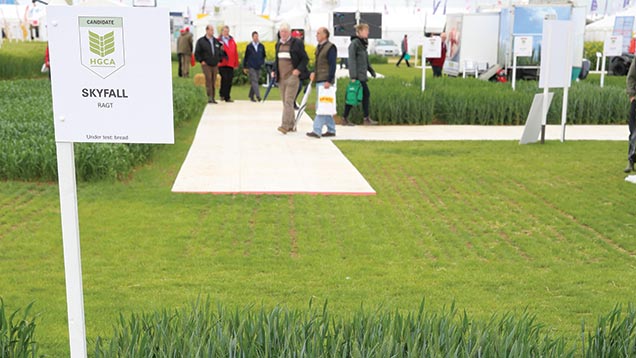 New breadmaking wheat variety Skyfall is set to be the second best-selling winter wheat variety this season in terms of certified seed sold to growers.

In what could be the strongest launch of a new winter wheat variety in 15 years, Skyfall has sold out in its first full year of sales and is only beaten by feed wheat favourite Diego.

According to certified seed sales data, Skyfall has grabbed 7% of the winter wheat market behind Diego at 17% but just ahead of fellow breadmaker Crusoe and feed wheat Santiago.

Certified seed sales usually make up about one half of the winter wheat seed market with the other half made up of home-saved seed.

Simon Howell, managing director of Skyfall’s breeder RAGT UK, says it is the first sell-out of a newly-launched winter wheat variety since biscuit-making variety Claire in 1999.

“A lot of farmers are keen to take a look at Skyfall and many have switched from Solstice and Gallant because of disease pressures on these older varieties,” he says.

Skyfall’s popularity, and also that of Crusoe, has seen breadmaking varieties take up 20% of seed sales of the total winter wheat seed market compared with 12% last year.

A potential large harvest of breadmaking wheat in 2015 could give millers plenty of choice and help cut German imports of bread wheats, says Mr Howell.

Last month, Skyfall was granted full milling approval from the National Association of British and Irish Millers (Nabim) following the variety being added to the HGCA Recommended List in December 2013.