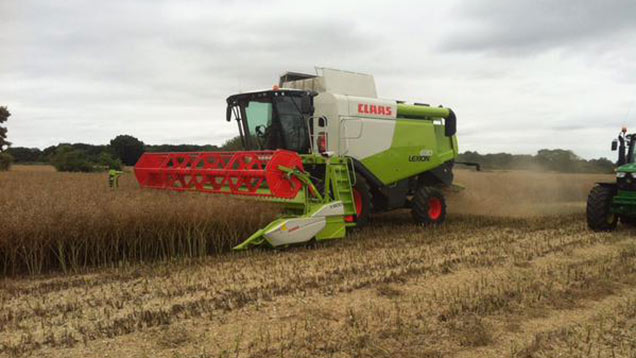 A small amount of winter oilseed rape variety Charger was harvested in Suffolk earlier this week, as grower Olly Pratt unleashed the combine on 9ha of his crop.

He grew 40ha of the high yielding variety this year.

He said: “We started with Charger for the first time last year, it did us well then and the early indications are that it has yielded 4.3t/ha so far this year, with moisture at 9%. It’s a good bet for us.”

Elsewhere on the farm, the 24ha of Incentive winter oilseed rape Mr Pratt grew this year isn’t likely to be harvested until next week, with his spring barley and winter wheat still a few weeks away from being ready.

“It’s been quite a slow and frustrating start for us this year with things well behind where they were a year ago. That 9ha was all that was ready so we need some sunshine now.”

Let’s give it a try! #harvest15 pic.twitter.com/FYIbl4EFzT

@FWharvest just got going, around the 9% Mark. Need some sun shine!! pic.twitter.com/gVoZS0v8SE