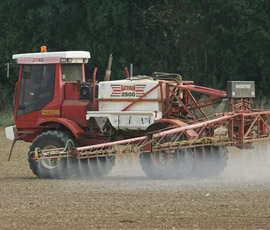 Drill, roll and spray on the same day is the message for growers looking to use pre-emergence herbicides tank mixes incorporating glyphosate this autumn.

Low dormancy and localised rain have prompted large flushes of blackgrass, but there is only a small window to use the non-selective herbicide after drilling.

Darren Adkins, commercial technical manager at Bayer CropScience, urges growers to look carefully for any sign the crop is germinating or emerging.

“If that’s the case, you’d be well advised to drop the glyphosate from the tank-mix,” he says.

Tank mixing Liberator (flufenacet and diflufenican) + glyphosate can provide a powerful weed killing tool, but the power goes both ways so caution is needed, according to Mr Adkins.

Agrovista agronomist Mark Hemmant agrees that growers will need to be careful this autumn particularly where crops are drilled across the whole farm before rolling and spraying commences, as the window of opportunity may have passed.

Mr Hemmant does however highlight the important role that it could play against the troublesome grassweed.

“Glyphosate can add valuable control of blackgrass, relatively cheaply, rather than spending what can be a great deal of money trying to get a few extra percentage points of control in-crop,” he adds.