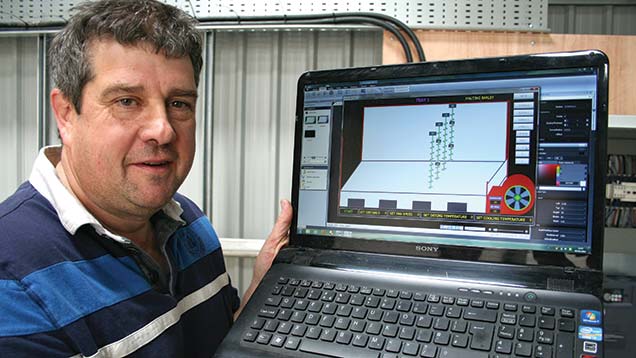 An “intelligent” stirring system that will even out variations in moisture content within stored grain is being developed to increase automation in a new grain drying and storage facility.

Devised by specialist Kenny Addison of Addison Electrical, located in Banff, Aberdeenshire, the system aims to minimise supervision of stirrers and save having to plot moisture content variations in the bulk by manual sampling or using a network of sensors.

Addison Electrical specialises in bespoke control panels with button and/or touch-screen displays for setting up and controlling ventilation and drying systems.

Automatic recording, history logs, fault alarms and fault diagnosis are among the features available, together with animated representations of equipment.

The control system designed for a new 1,000t grain store at Savoch Farm, Foveran, north of Aberdeen, provides an animated display for the bulk floor drying system, including the fans blowing air down a concrete panel central air tunnel to sunken laterals, and the four-auger Typhoon stirring system.

Stirrers are an essential feature of the store, says grower Andrew Booth. “Although we had the luxury of cutting grain at less than 20% moisture for the first time this year, we’re often harvesting much wetter grain here in Aberdeenshire, typically at 26-27%,” he says.

With 21t holding capacity, the GT 8000 Automatic is the biggest model in Opico’s range of portable continuous-flow batch dryers.

Stirring is a well-established way to optimise the efficiency of a ventilated floor bulk drying system.

It keeps the bulk “loose” to reduce static air pressure and allows significantly increased airflow, resulting in more rapid and even drying.

It also allows increased storage depth thanks to the improved airflow efficiency and reduces the risk of capping and spoilage caused by moisture extracted from the bulk being deposited on the surface.

The Typhoon design from Pellcroft Engineering has varied pitch flights to draw grain evenly along the length of each auger and can be built to span bunkers up to 10.5m wide.

The control display designed by Addison Electrical for the drying system has touch-screen buttons to set fan speed and the drying and cooling temperatures.

It is also used to set boundaries for the stirring augers, and shows them working backwards and forwards between those points in a spiral pattern.

“Whoever is managing the system can confine the augers to an area known to contain wetter grain so the moisture content can be brought down before drying the whole bulk,” explains Mr Addison.

“But we’re also working on a moisture tracking system using wireless sensors on the augers; if they move into an area of wetter grain, they will then concentrate on that area to bring the moisture content in line with the rest of the bulk, before moving on.”

There are also plans to convert the manual air tunnel slides to pneumatic operation so the whole drying system can become fully automated.

As it is, fan speed is automatically reduced as the grain is dried and presents less airflow resistance to maintain a consistent drying rate and save energy consumption.

That will help chip away at drying costs already brought to a minimum by using a woodchip boiler to provide heat extracted by the fan through a large heat exchanger.

“Energy-saving measures and Renewable Heat Incentive payments mean the storage building and drying system should pay for itself in eight to 10 years, regardless of what happens to grain prices,” says Andrew Booth.

The latest addition to the Opico range of dryers caters for growers with a lot of grain to dry post-harvest – it has 3t more batch-capacity than the next biggest model in the line-up.

The GT 8000 Automatic gas-fired recirculating mobile batch dryer has 21t holding capacity and throughput of up to 7.5t/hour thanks to a large plenum.

A ring burner fuelled by liquid propane gas and an on-board vaporiser provide controllable heat and a clean, efficient burn, says Opico, while fully automatic operation is provided by Grain Guard, a digital controller that can be programmed for round-the-clock drying.

It incorporates pre-set drying temperatures for different crops for easy recall, and the drying sequence can be tailored to suit individual farm set-ups.

Grain Guard also has a diagnostic function.
A three-phase power supply is required for the multiple electric motors. Prices start at £54,472.