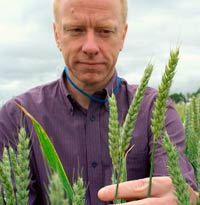 Investigations into the potential of using mixes of soft wheats for distilling have shown some promise, although not to the same level as seen previously for blends of feed winter barley, growers heard at Cereals in Practice organised by SAC, SCRI and Scottish Society for Crop Research in Scotland.

“In addition WN Lindsay, the grain merchants, put some blends of all four varieties on farm commercially. They are looking for more alcohol from a crop grown with a smaller carbon footprint.”

Initial results suggested that blends gave a small yield response, up to 5% under a high input system, compared with 15% in winter barley. “In wheat the gains are quite small – probably because the elite varieties are quite similar.”

But the blends also increased the stability of yield across site-to-site, while there was no degradation of spirit yields.

Blends could also lower input requirements, he suggested. “In theory they should slow the disease epidemic making it more likely for lower doses to work. But last year we had very little disease so haven’t tested it yet.”

Similar work was ongoing in spring barley, SAC’s Steve Hoad said. “Mixtures of three or four varieties don’t improve yields over the best varieties by themselves, but it does improve the stability of yield across sites.”

The research was continuing this year to investigate how robust blends could be, including growing them without fungicide or low rates of nitrogen.