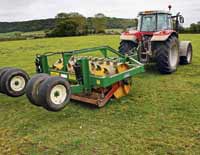 An organic grassland farmer says mechanical soil aeration is the reason why he is growing as much pasture now as when he was running a conventional system.

Derek Garrett’s 800-acre dairy unit near Thornbury, Bristol became fully organic in June 2008 and at that time his soil had not been in best health due to compaction. So when he took the decision to convert to a non-conventional system he began using a soil aerator.

“We needed to get the soil working properly by getting some air down into the roots and improving drainage,” says Mr Garrett. “The soil needed freshening up and we had to make better use of the nutrients.” His main focus was an area of the farm with heavy clay soil.

As an organic producer no chemical fertilisers are used and instead Mr Garrett has introduced more clover into the leys. Three years after first using the aerator the improvements are starting to come through. “I am growing as much grass as an organic farmer as I was when I ran a conventional system,” he says.

The biggest change seen has been from some heavily compacted arable land he took on last year and in Mr Garrett’s words, the land had “no life in it”. “Clay soil can get compacted and when that happens it tends to slump,” he says.

The benefits of aeration on this section of land are visible. “I didn’t have time to finish the whole field before the weather turned and you can clearly see the two halves of the field. The half I have aerated looks much more productive.”

Soil tests at Mr Garrett’s farm revealed some land was also high in iron and aeration has helped unlock the iron and wash it out.

Mr Garrett uses the aerator in conjunction with a sub-soiler, running the sub-soiler over the land first. He runs the machines over the pasture ground twice a year – in April/May and in September/October and once over the silage ground, depending on weather conditions.

Aerating the soil means there is less run-off and land doesn’t get as waterlogged because, by opening the soil structure, surface drainage is improved with faster absorption of slurry and winter rainfall.

Mr Garrett decided to buy his own aerator, but other farmers find it more economically viable to pay a contractor to do the work.

One of those is Tom Mallison, a dairy farmer who runs a 240-cow spring calving herd near Gillingham, Dorset. He runs a low-cost system and isn’t keen on investing capital in machinery.

Mr Mallison is new to farming, taking on the land two-and-a-half years ago, and like Mr Garrett, soil compaction was an issue. He was keen to increase the earthworm count in the soil, which is a mixture of limestone, clay and sandy loam.

Other farmers in the discussion group he belongs to, Grass Roots, were reporting good results from using aerators. He was also advised it would improve the soil’s use of nitrogen.

Mr Mallison knew of two local contractors who had aerators, so he decided to buy in their services instead of purchasing his own machine. He pays between £7-£7.50/acre.

“We can pick and choose when we aerate and how much we do,” he says. “We don’t call the contractor out for less than 20 acres and it can be up to 100 acres.

“We try to do it in March and September but it does depend on soil conditions. When you do it in dry weather you risk creating your own drought because it opens up the soil and it cracks. When ground conditions are too wet it will cause smearing.”

He says farmers often won’t see a difference for a couple of years because the improvement is gradual and the benefits often depend on how serious the problem is. “What I find on most farms is the difference between the best and the worst producing fields is tenfold, the difference is massive.”

He advises farmers to identify why some paddocks are performing highly when others are not doing so well. “Is it poor drainage, poor species, a lack of fertiliser or compaction. All are possible reasons,” he says. “It is not an argument for aerating the whole farm but it may be one for doing the bottom-performing quarter.”