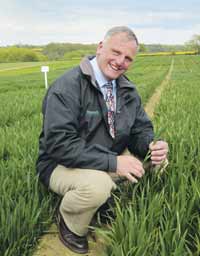 Growers could save 50-100kg/ha of nitrogen by applying friendly bugs to wheat crops, according to research carried out by Masstock as part of a European programme.

The firm had been testing various soil bacteria for their ability to either increase yields or replace nitrogen as part of the Rhizobacteria for reduced fertiliser inputs in wheat (RHIBAC) since 2002, Masstock’s Colin Lloyd said at a press briefing.

Initially statistical yield responses had proved elusive, he admitted. But for the 2008/9 season two new strains of bacteria were trialled that had plant growth-promoting properties as well as being able to fix nitrogen or release phosphorus.

In total four bacteria strains were each incorporated in a compost with the seed of four varieties and drilled in mid-November. Two doses of 75kg/ha of nitrogen were applied in the spring, and the bacteria-treated plots were compared against plots that had received the same nitrogen strategy. In addition, other plots were treated with nitrogen doses ranging from 0-250kg/ha were included in the trial.

The results had given hope that bugs could be used to either boost yields or reduce nitrogen rates, Mr Lloyd said. Both new bacteria strains, Bacillus pumilus C26 from Chile and a second Bacillus species, OCU-142 from Turkey, gave statistically significant yield responses of over 0.7t/ha compared with the plot with the same nitrogen dose and no bugs.

“The bugs are working and actually gave the same yield statistically as the 200-250kg/ha of nitrogen plots [without bacteria]. In this trial we could have replaced up to 100kg/ha of nitrogen by using the bugs.”

A second trial in Wiltshire produced similar results, he said. “In fact, all four bugs produced significant yield responses of 0.7t/ha on a 12t/ha crop.”

That replaced around 50kg/ha of nitrogen when compared against the other plots just receiving different levels of nitrogen.

Potentially that level of response replicated across the 1.85m ha of UK wheat could reduce nitrogen use by around 225,000t, saving k50m, he said.

There was much more research needed before that happened, he admitted. “The system we used here of mixing the bugs with compost and applying with seed isn’t necessarily practical. But we’ve also looked at using foliar sprays at GS31 and also doing some trials with capsules of bacteria.

“We’ve been trying to find which bug to use first, then work out the delivery system.”

Further trials are ongoing this season, which will be the last of the current project. “If we get the same data for a second year, we would be interested in talking to the research consortium about continuing and possibly commercialising successful bacteria strains,” he concluded.

is attempting to bring some science to the use of plant growth-promoting rhizobacteria, according to Nicolaus von Wirén, a researcher in plant nutrition from the University of Hohenheim.

It had been difficult to produce consistent results using bacteria for either their nitrogen-fixing ability or growth-promotion properties in the past, he said.

That was partly because bacteria in commercial products varied in both identity and quality, as well as a lack of understanding of how the plant-bacteria interaction worked. A further complicating factor was that individual varieties appeared to respond differently to the same bacterial strain, he explained.

The project had various aims, he said. Those included trying to understand how bacteria promoted growth in plants, finding specific bacteria with beneficial properties and comparing delivery methods in wheat.