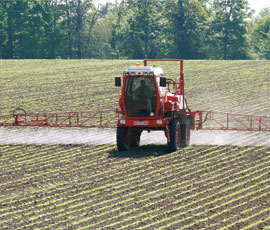 The lack of much-needed rain was the main talking point at the recent BBRO open day at Bury St Edmunds in Suffolk, where varieties and pest control were also on the agenda.

Reports of leaf miner and thrip damage to treated sugar beet crops were due to the lack of soil moisture, said Mark Stevens of Broom’s Barn. “Although 92% of the beet area has been treated with one of the three commercially available seed treatments, there hasn’t been enough rain in most beet-growing areas for crops to be able to pick up the chemical,” he said.

As a result, leaf miners and thrips, both opportunist pests, had caused more damage than expected, he added. “In normal circumstances, we would expect these seed treatments to give 14 weeks’ protection.”

The first Myzus persicae aphids were caught in traps last week, reported Dr Stevens. “The hard winter hammered the aphid population. But growers should be aware that we are just seeing signs of the first aphids arriving.”

Beet cyst nematode is known to affect 15% of the current beet area, but samples being sent into the Broom’s Barn clinic suggested it was increasing, he added. “Symptoms do get confused with those of rhizomania,” he pointed out. “Testing services are available and there are resistant varieties if you have a known infestation.”

Current BCN work includes a survey of the status in UK sugar beet fields and some in-vitro box studies. “The studies will allow us to get a better understanding of the effect of BCN and the population levels at the end of the season.”

Meanwhile, the new rhizomania strain (AYPR type), which has been found in 22 fields in Suffolk, Norfolk and Essex, was starting to spread, warned Dr Stevens. “The Dutch and French are having the same experience. Fortunately, we now have some genetics with enhanced or tandem resistance, which may prove invaluable.”

On variety choice, Colin Walters of British Sugar recommended looking for those with good bolting resistance, especially when planning to drill early.

He pointed out that all the varieties on the Recommended List now achieved 92-96% establishment. “Disease resistance figures are useful too, but even the most resistant choices will still get disease; it will be seen one week later in them.”

Mr Walters predicted that Rosalinda and Valeska would be the variety mainstays, with Pasteur, Cayman and Columbus also doing well.

Isabella offered dual resistance to rhizomania, while Annouschka and Sentinel were BCN tolerant, he noted. “But they’re off the pace for yield in the absence of the pest.”

Older varieties such as Bobcat, Bullfinch and Aimanta had nothing wrong with them, he acknowledged. “But it’s probably time to start replacing them with some of the newer, higher yielding types.