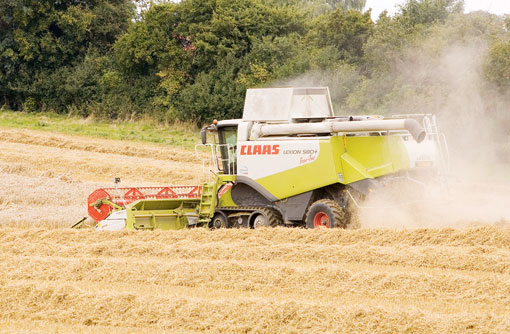 The rented Stenton Farm’s predominantly lighter soil types are more suited to growing spring malting barley, with yields in the region of 8.75t/ha the target.

Soil organic matter is crucial for healthy soils, but with no infrastructure for livestock on the farm, he knew when he took over in 1991 he didn’t have the right tools for maintaining organic matter levels.

Fortunately he was in a position to produce an agreement of trading straw for muck with a neighbouring livestock farmer, John Whiteford. “It works to both our advantage,” Mr Rennie says.

Mr Whiteford bales about 200ha of spring barley straw behind the combine, using lightweight, perhaps slightly old-fashioned machinery. “He is handling straw the same way we would have in 1985.”

But using a smaller Claas round-baler and lower-powered Ford tractors helps avoid the compaction that can come with running heavier machinery such as Hesston balers and larger tractors.

In return, Mr Whiteford delivers about 1,000-1,200t of muck back to the farm twice during the year, which is applied where it is most needed as pinpointed by broad-spectrum soil analyses, including organic matter, which are carried out by soil type once every three years.

“We’ve managed to improve organic matters on the lighter sandy soils, which are inherently low in organic matter, and normally let you down in yield.”

Across the farm as a whole the policy has maintained organic matter at a healthy 5%, despite the farm using the plough.

“Non-inversion tillage is one of the best ways to preserve organic matter, but it doesn’t suit our farm. So we plough nothing deeper than 6-7in. That is where all the humus is. If you plough deeper, you hit clay with no organic matter, and ploughing 3in of that up would undo all our good work in one year.”