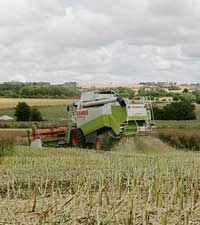 Many farmers in the South of England have cut winter wheat before oilseed rape this year, with yields proving extremely variable.

Stewart Sinclair, independent agronomist at Hampshire Arable Systems, said the early wheat crops were unlikely to be the best. “There will be better to come.

“But yields are all over the place – there are going to be a lot of low-yielding fields, between 4.9t/ha and 7.4t/ha (2-3t/acre), while others are near-record.”

Early results from Gallant had not been very exciting, with Solstice doing better so far, he said.

Winter barley yields ranged from less than 4.9t/ha (2t/acre) to over 9.9t/ha (4t/acre). “The six-rows seem to have done well – particularly Suzuka and Volume.”

Oilseed rape yields had generally been pleasing, including Cabernet, which had looked so poor earlier in the year.

“It’s early days as it is quite a late variety – but I have one crop which was badly affected by the frost, and has still done 4t/ha (1.6t/acre).

“Most people are happy with it, and it’s something I’m probably going to stick with next year.”