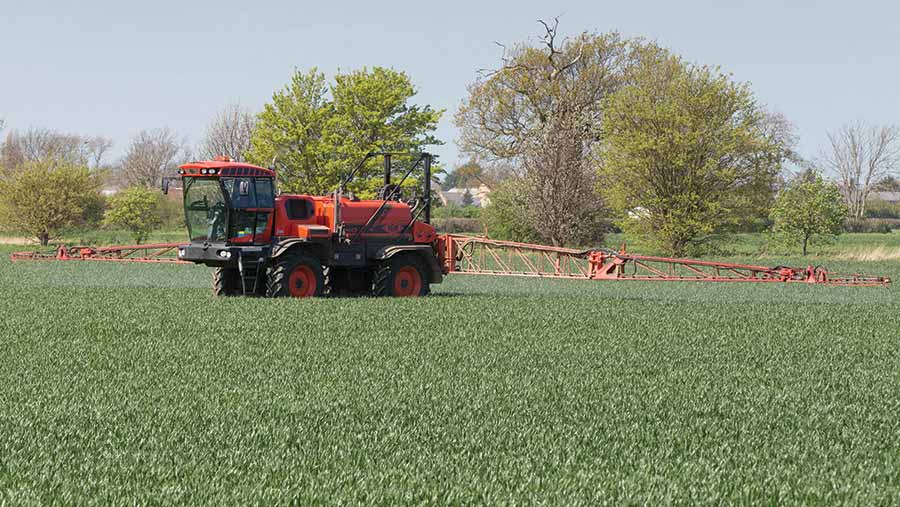 The timing of fungicide on wheat will be even more important this season due to the declining efficacy of key azole fungicides against wheat’s most damaging disease, septoria.

With plenty of disease evident in forward crops after a mild winter and grain prices near rock bottom, making the best use of disease-controlling fungicides is critical.

Bill Clark, technical director at crop consultant Niab, advises that growers need to focus on growth stages, especially as crops this season look more advanced than they really are.

“We need to go back to basics and get the timings right as this has become more important because of the loss of eradicant activity of the azoles,” he tells Farmers Weekly.

In the past, growers had more flexibility because of the strong curative action of the systemic azoles, but now they need to get timings spot-on.

Getting the T1 timing correct, which is often in late April, is critical to keep the top three leaves free of disease and setting the timetable for later sprays.

“Getting the T1 spray on too early is just as bad as getting it on too late,” says Mr Clark.

Paradoxically, he believes the earlier T0 spray, often applied in late March, should be based on disease levels rather than growth stages.

If there is plenty of yellow or even brown rust in wheat crops, then growers should look at treating, while at this stage there is less urgency to treat for septoria.

“The presence of rust should dictate. If there is active rust, growers should look to spray and not be driven by growth stages,” says Mr Clark.

Leaf threes are shown in red on the main stem and tillers at the T1 stage. © Niab

He says the key to identifying T0 is by dissecting the plant rather than to feel for nodes. The growth stage for T0 is GS30-31, and GS30 can be detected when the tip of the developing ear is 1cm or more above the stem base.

GS31 is defined as when the first node of the wheat plant is more than 1cm from the base level and also the developing ear is less than 2cm above that first node.

Choice of product for a T0 spray is likely to include an azole such as epoxiconazole, tebuconazole and cyproconazole, with chlorothalonil added to give protectant activity against septoria.

Mr Clark again advises to dissect plants to identify the T1 timing at GS32. Leaf three should be two-thirds to three-quarters emerged on the main stem and one-quarter to half emerged on the tillers.

He warns growers that if they spray too early at T1, the fungicide will miss most of leaf three and may only cover the tip, and miss leaf three altogether on the tillers.

However, go too late then the tip of leaf three will have been too long exposed and then there is little growers can do to eradicate disease.

He warns against using calendar dates for sprays but as the flag leaf is usually emerged in most of England around 15-20 May, the T1 should probably be in late April to give two to three weeks’ protection until the T2 flag leaf timing.

Again, he emphasises the need to look at growth stages, but as guidance if growers are planning a T1 in mid-April, it is likely to be too early.

Of course, if T1 is reached early then there could be a big gap between T1 and T2, and growers should consider a T1.5 aimed at leaf two, which should be two-thirds to three-quarters emerged on the main stem.

Ben Freer, business development manager at agrochemical group BASF, says last season was not so much a low disease year as a late disease year, and therefore building resilience at T0 and T1 is important for disease control later in the season.

“The T0 spray is less critical than T1 but it buys you piece of mind. If you have applied a T0, then rust and septoria control at T1 is easier,” he says.