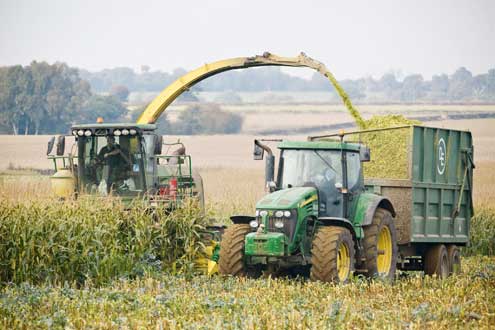 A new liquid fertiliser nozzle may help German growers overcome the challenge of being prevented from using standard flat fan nozzles within 20m of a hedgerow or watercourse.

In Germany, there are 16 federal states each with its own environmental requirements. The key principle is that in a region where there is low biodiversity, hedgerows have to be given the same protection as water courses.

“If your authority does not have a good biodiversity index, you will have to implement the same statutory 20m buffer zones along hedgerows as required alongside water courses,” says Jenz Luckhard application specialist for Syngenta in Germany.

“Basically it means you can’t use a standard flat fan nozzle within 20m of a water course,” he says.

To address this problem, Lechler has developed a new liquid fertiliser nozzle that may well form the basis of a new 90% drift reduction nozzle while allowing effective coverage.

German sprayer operators face a different registration system to that in the UK, as well as stringent biennial tests for their sprayers.

“Before operators can officially go spraying, they need to pass an exam on Integrated Crop Protection (ICP),” says Mr Luckhard. Once passed, there is no requirement for ongoing training like the NRoSO scheme in the UK.

But sprayers have to be tested every two years, including a patternation test along the entire boom to ensure the nozzles are applying the spray correctly. General boom condition is all important as a bent or disfigured boom will affect the result of the patternation test.

Nozzles must have a coefficient variation of 10% or less. “If they exceed this they need to be replaced and typically about 18% of nozzles fail in these tests.”

The chemical induction hopper, tank and agitation system are also checked thoroughly as are the sprayer hoses and anti drip nozzles.

About 5% of sprayers fail for pump related problems and 8% fail due to leaking anti drip nozzles,” adds Mr Luckhard.

Government officials also do spot checks on sprayers and operators in the field.

Severe winter weather in Europe resulted in the loss of many oilseed rape crops, but trial plots treated with a new growth regulator survived.

Temperatures as low as -23C effectively killed off all the winter barley, a large proportion of the winter wheat and rape at one of Syngenta’s trial sites last winter. “Normally we get a covering of snow to protect the crops, but that did not happen this year,” says Mr Luckhard.

However, oilseed rape plots treated with Toprex (difenoconazol + pactobutrazol), a new product not approved in the UK that combines phoma control with a growth regulator, survived.

Co-operation between growers is a key element behind the success of one biogas unit in southern Germany where five farmers grow ?ha of energy cropping.

It started when Horst Düll’s combine broke down. “When I was at the engineers, I met my neighbour whose combine had broken down as well.”

The chance meeting led to five farmers investing in a new combine and eventually farming their total area as a co-op.

“The combine purchase seemed straightforward enough, but buying the first tractor did require a different mindset,” says Mr Düll. The cooperative ethic really meant that the group could use everyone’s strength and it wasn’t long before they were farming their 600ha as a group. This level of cooperation led to the five farmers investing in the 15,000kw/hr biogas unit.

The group now has to rent additional land for maize and it can involve carting maize over long distances (up to 15km) which means higher transport costs. “In situations where transport is over 10km, we tend to use a snapper header to harvest the cob and the top half of the plant, resulting in fewer tonnes of higher energy crop.

All the forage harvesters are GPS aided and record all yield and dry matters. “We pay growers on a per tonne basis adjusted to 32% dry matter. This seems fair to those who harvest early in the season as well as those at the end,” says Mr Düll.

Maize varieties are chosen for their energy content. “More energy in the crop means less energy is needed to make the process work,” says Mr Düll.

Crop rotations within the co-op consists of wheat, maize, wheat then either maize or sugar beet. Any manures or biogas wastes can only be applied to the land over winter if there are green cover crops in place.

The co-op’s biogas unit needs around 30t of maize silage daily and to store the maize, there are three clamps with a capacity of more than 10,000t. “We don’t apply any additives as on this scale it is unnecessary and too costly,” adds Mr Dull.

“The process is very simple, we load the 30t into the reactors each day and then two large stirrers gently turn the silage to allow the gas to migrate to the top. We then collect and compress the gas and use it to run a generator producing 15,000kw/h every day.

The national grid prefers biogas units because they offer a constant feed into the grid compared with wind or solar,” says Mr Düll. The generator runs at 97% efficiency and is only stopped for regular maintenance.

Once the digestate comes out of the reactor it is fed through a separator and the drier, fibrous material is then composted. A small percentage of the water is reused in the reactor and the balance is stored in an above ground tank.

“We are looking at ways in which we might be able to market the compost. That’s our next aim,” adds Mr Düll.

Growing crops specifically for anaerobic digestion is nothing new in Germany.

In the recent past the government was keen for land to be taken out of food production when there was over production and low commodity prices.

In total, renewable energy crops now accounts for 800,000ha of land. However, the public’s perception is changing and people aren’t so comfortable with the level of renewable energy.

The appearance of the countryside has changed; more maize, big biogas units, solar panels and lots of wind farms on arable ground are just some of the concerns being voiced.

One factor affecting growers is the huge effect these biogas units have had on farm rents, says grower Mr Düll.

While this has been great for some it has bought hardship on the livestock farmers who historically had rented additional ground for maize and other forages.

“There are a few other sensitive issues,” says Mr Düll “Mud on the roads, large trucks, tractors and trailers. The other problem is that people get fed up of looking at maize crops because it obscures the view,” adds Mr Düll.