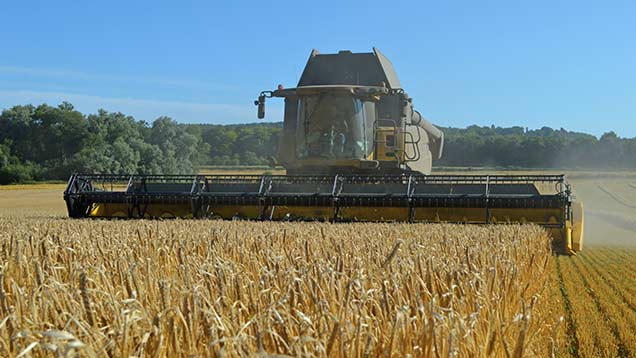 Spring barley harvest is finished on one Dorset estate with a good average yield of 8.5t/ha and all the grain set to earn a valuable malting premium.

Farm manager Martin Ford and his team started cutting spring barley on Sunday 2 August and all 191ha of the crop was in the barn by the following Sunday (9 August).

“Harvest is going very well. It was a little slow at the start of last week but the weather improved and we finished the spring barley on Sunday,” he tells Farmers Weekly.

All the spring barley area is down to the variety Quench, and although it is an older variety it shows few signs of brackling, where straw stems break, on the Velcourt-managed estate.

Moisture levels started off at 16.5% but soon starting falling to 12.5% as the 35ft header New Holland combine gobbled up the crop.

Spring barley has done well in the past two years of the estate’s sandy loam over chalk soils with Quench being grown on a malting contract for farming co-operative Openfield.

Variable rate seed rates were used on the spring barley for the first time and this improved the evenness of the crop, and the technique is likely to be used on other crops on the farm.

“Spring barley is a crop which is well worth growing with a good yield and a ready malting market.”
Martin Ford, farm manager

Nitrogen levels for the crop are about 90kg/ha with as much as 120kg/ha used in some areas.

“Spring barley is a crop which is well worth growing with a good yield and a ready malting market,” says Mr Ford.

Combines started rolling on the south Dorset estate at the end of the first week of July with 164ha of the malting winter barley variety Maris Otter yielding 5.5t/ha which is much in demand by microbrewers.

Some 300ha of oilseed rape showed a good average yield over 4t/ha.

Now there is only 520ha of winter wheat to cut with Diego, Dickens, Evolution and Invicta grown.