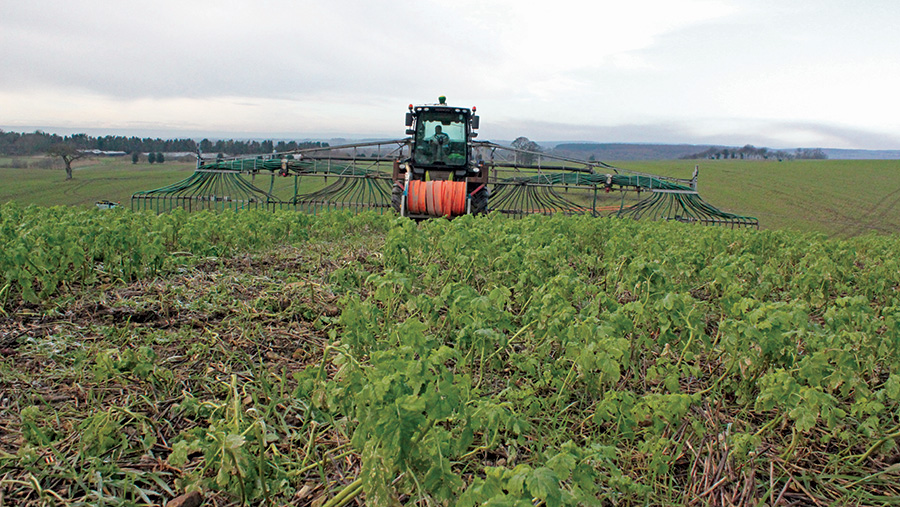 Brothers David and Simon Hall manage about 405ha of blow-away sands to heavy clays in the Vale of Pickering, on the southern edge of the North York Moors National Park.

In the recent past, cropping had consisted of winter wheat, oilseed rape and winter barley, but a by-product of the farm’s thriving 650 sow pig unit – producing pork for supermarket giant Asda – forced a change in thinking.

The pigs produce a lot of slurry and with no long-term storage and nitrate vulnerable zone closed periods restricting application timing, getting spreaders on the land without damaging soils or winter-sown cereals was proving problematic.

The final straw was the fatefully wet year of 2012, when persistent high rainfall left fields sodden and tricky to access without making a mess.

Subsequently, the brothers decided to invest in a £30,000, 4,000cu m slurry lagoon, which enabled them to turn the liquid into a valuable asset rather than hindrance.

Their pig slurry can now be stored and applied to the farm’s land at two key periods using an umbilical system – once in the autumn applied to stubbles ahead of winter-sown crops and again in the spring once the close period opens.

However, the missing piece in the puzzle was a spring crop to minimise the problem of machinery running over established crops during the second spring application.

Spring barley was the farm’s choice and David explains it has now upped its area to about 61ha, at the expense of winter cereals, to allow the lagoon to be emptied ahead of the crop being sown on lighter soils.

“It fits in well with the pigs and it’s cheap to grow. With the slurry, our spring barley had no fertiliser out of a bag last year and we only went over it twice with a sprayer,” he adds.

David concedes they wouldn’t grow as much without the pig unit and the slurry it creates, but it has added a valuable crop to the rotation – particularly if it makes malting spec and it has provided good returns so far.

Their independent advisor and AICC member Patrick Stephenson says that the fertiliser savings and a typical programme of one pre-emergence herbicide, one fungicide and manganese on the lighter land puts them “way ahead of the curve”.

“I was sceptical about profitability as varieties didn’t have enough output and was also concerned the slurry applications would make it tricky to hit the correct nitrogen and it would go for feed,” he adds.

The farm typically achieves in excess of 9t/ha for its winter wheat and about 8t/ha in spring barley, but the saving of about £150-£200/ha on fertiliser inputs more than buys back the yield lost.

Although the grain is primarily grown to feed the pig unit and not malting, but Simon explains that the grain is always tested for quality and where possible sold for a premium.

The variety Propino averaged 9.25t/ha in 2015 and most has made the maltsters requirements and achieved a £20/t bonus over feed.

The addition of spring barley has been complemented by cover crops, with the farm so far experimenting with a mix of mustard and oat mixture, which costs about £9-£10/ha to grow.

It is established in the autumn using a Sumo Trio, which works shallow to allow faster work rates and relatively low fuel consumption compared to seed-bed preparations for its conventional cash crops.

David explains that it complements the slurry system well, keeping the soil friable and relatively dry for spring applications and drilling, in addition to negating wind erosion on sandier fields.

“The scratching of the surface also gets any rubbish to germinate. Brome is more of a problem for us than blackgrass and that gets sprayed off, so you get a good kill,” he adds.

Mr Stephenson says that at present blackgrass isn’t a major problem, but there is a risk it could factor in the future, particularly on the heavier land at the bottom of the valley.

However, the difficulty will be maximising yield potential of the spring barley, which needs to be drilled as early as possible to extend its growing season.

“Typically, the soils down below don’t dry out until April, but we want to be preparing a good seed-bed to drill in March,” says Mr Stephenson.

To improve workability on the heavier soils, the farm has the potential to improve organic matter with its slurry applications and cover crops may also have a role in drawing out water ahead of spring to allow earlier drilling.

“These are things we will start to dabble with to see if we can make some progress with spring cropping on the heavier land,” adds Mr Stephenson.