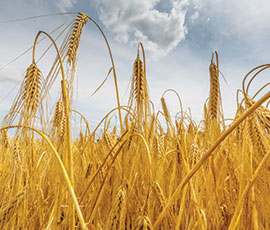 The prospects for spring malting barley crops are looking good for 2014, with premiums expected to rise, as Liz Robinson finds out

Bumper planting and high yields last season led to an additional 2m tonnes of winter and spring malting barley and this glut was soon felt after harvest, with malting premiums falling to just £5-10/t.

There is plenty of malting barley still around on farm, although how well it will overwinter is dependent on how growers manage it in store, explains Gleadell’s Stuart Shand. “We are starting to get germination problems already.”

The domestic demand of 1.9m tonnes is already fulfilled and UK maltings are operating virtually at capacity, so the remainder of the 2013 harvest crop will either be exported for malt or more likely exported for feed, he says.

The lack of capacity to overwinter large quantities of malting barley prevented maltsters from buying more of the UK crop, although the malting industry did like the 2013 crop because of the good quality, he says.

Indications from The Early Bird Survey led by The Andersons Centre suggest the wheat area (winter and spring) will be up by 22% on last year while the spring barley area will be substantially lower than last year, by more than 40%, to 534,000ha. Additionally, winter malting barley varieties are down 20%.

Although there will be a bigger carryover from last season, there will be fewer malting varieties sown, while there is strong and increasing demand for malt distilling. This is already being reflected in the premiums on offer for 2014, with levels back to £20-23/t.

“We only need a planting problem or drought somewhere in Europe and the premiums can soon move. There is a good chance of a bit more volatility,” Mr Shand says.

He advises growers that 50% of the malting barley they grow should be on some sort of contract. “There is no point risking growing a variety which you might not be able to sell.”

His calculations indicate a gross margin second only to spring peas, but only if growers can hold on to their barley after harvest as he predicts there could be problems moving barley because the maltsters’ stores will be full with old crop.

“We only need to a planting problem or drought somewhere in Europe and the premiums can soon move.”
Stuart Shand, Gleadell

Frontier’s David Waite urges growers to discuss with their merchants which contracts will suit them in their location.

With a lack of capacity in the Scottish malting industry, as much as 300,000t of barley could be malted in England and taken up to Scotland for distilling, and that means that more than ever growers have to select the right variety.

More contracts are being linked to wheat futures, allowing for transparency for both the grower and the consumer, he adds. “But there will be limited contracts available for those varieties not fully accepted by the Institute of Brewing and Distilling [IBD].”

The advice from Openfield’s Lee Bennett is to be in tune with your designated maltings and make a variety choice on what they want to buy. “The merchants feed the maltings and they should be giving the guidance,” he says.

“There may be a market choice of 10 spring barley varieties, but a grower can only select three because that is his market. And just because it is on the IBD list it doesn’t mean the maltsters want it,” Mr Bennett adds.

With brewing demand in decline and more than 50% of all the malt now going into the distilling industry for Scotch Whisky, the need to become variety specific is increasingly important, explains Bob King of the Crisp Malting Group.

“With no more malting capacity in Scotland, there is a move from middle-range nitrogens [1.65-1.85%] for the brewing industry towards lower nitrogen [max 1.65%], zero-glycosidic nitrile [GN] varieties in the east of England,” he says.

Crisp is only contracting zero- GN varieties, with Concerto and Odyssey the only two options in England. Non-GN varieties include the version of a gene that makes them non-producers of GN, which can lead to the formation of toxic compounds in the malting process.

“Odyssey is the highest yielding zero GN on the list and it is a logical replacement for Concerto, which is the biggest single variety grown in the UK at the moment,” Mr King says.

“In Scotland and the North East, we also have Moonshine, an early variety, and there will be some Glassel in the North,” he adds.

Propino and Tipple will be the favoured varieties with domestic brewers, adds Mr Waite, while Quench remains almost exclusively for the export market.

Newcomer Sanette, the highest-yielding variety on the list at 109%, is provisionally approved for brewing and stands a good chance of becoming widely accepted, he says.