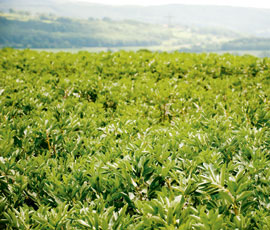 Spring beans have earned their place on Burbage Farms in Leicestershire, despite their tendency to give grower Mark Wells an unpredictable ride.

The need for a good break crop, which helps to spread workload throughout the year, is just one of the reasons for Mr Wells’ loyalty to the crop. Others include their ease of harvesting, suitability for use with his HLS agreement and help with the grassweed burden.

“What’s more, as nitrogen costs go up still further, having a crop which fixes its own and leaves a legacy for the next one, must be a good thing,” he says.

Mr Wells, who farms in partnership with other family members at Hinckley, specialises in seed production of wheat, oilseed rape and herbage seed, as well as some spring crops.

Seed production is a major consideration when it comes to choosing break crops, as the barley area has to be limited to prevent any problems in high grade seed wheat crops.

“In the last few years, spring barley margins with their high malting premiums have looked tempting,” he admits. “But barley doesn’t fit in so well and can become a weed in our wheat.”

It also means that short rotations aren’t an option at Burbage Farms, which is why he hasn’t increased the amount of oilseed rape grown. “We’re farming for the long-term. That means not growing oilseed rape closer than one year in three. The risks of diseases like club root, sclerotinia and verticillium wilt are too great for my liking.”

Furthermore, beans withstand bad weather at harvest better than most break crops, he points out. “There’s less risk of spoilage and crop loss than there is with peas.”

His spring bean variety choice is Fury – one of the beans with the highest yield potential. “They are also a pale hilum type, so there’s a good second premium market for us if the crop isn’t taken for seed.”

Ploughing ahead of the crop is preferred. “We’ve tried other establishment methods, but we like the help that ploughing gives with grassweed control. The heavy land is ploughed early, to make the most of a frost mould, but the lighter land is ploughed late, so that the soil doesn’t slump over the winter.”


Spring cultivations are then kept to a minimum. A seed-bed is created on the light land with a spring tine based cultivator, while a power harrow does the same job on heavier soils.

Sowing is done with a Vaderstad Rapid, with the beans being placed 7.5-10cm deep into moisture. They are rolled a few days later. “I am investigating a one pass system with a simple seeder on the back of a subsoiler, as is being done successfully with oilseed rape. It may prove useful.”

Mr Wells admits to experiencing some variability with the bean crop. “The last two years really illustrate that. In 2010, we had our worst ever yield of 2.5t/ha, after very poor establishment. This year, the same variety gave 6.18t/ha.”

The five year average for Burbage Farms is just over 5t/ha, he reveals. “There have been some odd weather patterns in recent years, with very dry springs. One of our challenges is to manage this variability, which we are hoping PGRO can help us with.”

In 2011, the crop was drilled on March 10, into moisture. A robust pre-emergence herbicide of Sherman (pendimethalin) plus Skirmish (isoxaben + terbuthylazine) was applied to tackle the broad-leaved weeds, which was then followed up with a graminicide.

“Unfortunately the drought meant that some weeds came through the pre-emergence treatment so we had to make a further application of Basagran (bentazone). At a cost of £37.12/ha, that blew the herbicides budget.”

The beans also received three fungicides, the first of which was for downy mildew when the crop was just 15cm high. Insecticides were used for bean weevil and Bruchid beetle, while both manganese and compound fertiliser were also applied.

“The sprayer went into the fields seven times, mostly late evening, once the bees were back in their hives. Beans aren’t a low input crop, they need attention to detail at every stage. Bruchid control remains one of the most difficult things.”

Mr Wells recorded just 27mm of rain between sowing and harvest in 2011. “But the crop grew well. We had a population of 40 plants/sq m and they set huge numbers of pods.”

His final point is that commercial crops could get away with less herbicide and the glyphosate at harvest, reducing expenditure considerably. “This year’s crop was as good as bean growing gets.”