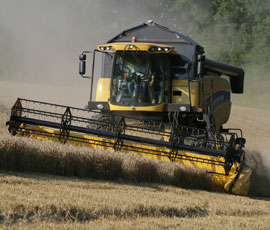 Richard and Tom Brown are both busy combining at Priors Farm, Newbury, Berkshire, but are disappointed with yields so far.

“I don’t know if the scales are wrong or not – I would hope it’s doing more than that, but it certainly won’t get anywhere near 7.4t/ha, which is what we’d normally expect.”

With the crop being so behind during the very hot weather in June, Mr Brown wondered if that had caused more damage than he had realised.

“I’ve heard some very mixed reports on wheat – any early crops on good soil have apparently done well, but on lighter land it’s been very bad.”

Mr Brown had another 60ha of spring barley to cut on a neighbour’s farm, and expected to move into his own wheat after that. “It won’t be too long now.”