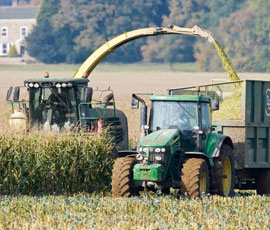 Maize for biogas production is a rapidly expanding market and provides an exceptional opportunity for getting on top of resistant blackgrass.

Varieties that enable late spring sowing, up until mid-May, also mean that soil structure can be repaired following the disastrous autumn conditions of 2012.

There are about 15 anaerobic digestion plants currently operating in the UK, but there are at least 30 more in the pipeline. It is likely that over 100,000 ha of whole-crop maize will be required, according to Simon Draper, independent agronomist for the Maize Growers Association (MGA).

Mr Draper says that the crop should not be grown as a last resort, as sowing under wet and waterlogged conditions can give poor results. But with good soil care and proper planning it can give very good returns, comparable with a high yielding winter wheat. “If maize is going to be grown on heavier soil types in 2013, then great care should be taken to get a dry friable seed-bed to ensure rapid germination, as maize hates any sort of compaction,” says Mr Draper.

“There are over 180 varieties to choose from with differing speeds of maturity,” he says. “The later you plant, the earlier maturing variety you should choose. For biogas production, the aim is to get as much crop mass as possible, so dense populations of tall plants are best.”

Mark Wells is farm manager and director of Geo E Gittus and Sons, and has grown 480ha of biogas maize for the company’s own 1.4MW digester. This plant started generating in January 2012 and produces enough electricity to power the equivalent of 3,000 homes. Nearly a third is used on the farm and business park, near Bury St Edmunds in Suffolk, and the rest is fed into the National Grid.

“We have eight growers supplying us with the additional maize that we require,” says Mr Wells. “People came out of the woodwork wanting to grow for us at first, but it is important to look carefully at the costs.

The cost of seed is high – approximately £125/ha – to achieve a population of about 100,000 plants/ha. There are a huge number of varieties to choose from so it is possible to tailor the variety for field and farmer. For example, on heavy land where you want to follow up with early wheat, use a forage-based variety that should harvest at the beginning of September, with yields of 40-42t/ha.

Biogas varieties mature later but can yield upwards of 50t/ha for a late-September harvest. This year Mr Wells says the farm’s yields averaged 42t/ha over the 480ha, but the range was 25-60t. This gave a good return compared with a second wheat or spring bean crop. However, this does not compete with first wheats or high-value potatoes or onions.

Herbicide costs are £50-90/ha, but in bad blackgrass areas it can do an amazing “clean up job”. The farm generally uses one pre-emergence spray, followed by one post-emergence spray.

“On the whole, land is ploughed before the maize crop – again this helps with blackgrass control and generally there are very few pests or diseases, so pesticides or fungicides are not required, especially here in Suffolk,” says Mr Wells. “We use a local contractor for harvesting when the dry matter is between 30% and 33%. The crop goes over a weighbridge and is clamped. We have three 7,000t clamps.”

An important consideration for prospective growers is proximity to the anaerobic digestion plant. Oliver Knowland, farmer adviser to Future Biogas, believes that biogas maize is an excellent crop for farmers who have gone out of cows. “If they have the silage resources and the land, the crop can be short chopped, treated with additive and covered in three layers of plastic. Waste and secondary fermentation will be minimal.”

The silage can be stored for up to two years, according to Mr Knowland, though it shrinks down considerably. “Even if you are a long way from a biogas plant you can transport up to 30t on a lorry, extending the viable distance. If you are using a tractor and trailer, only moving up to 15t at a time, you need to be a lot closer.”

Mr Knowland says that maize is the ideal crop for biogas thanks to its dry matter which contains starch, digestible cellulose low in lignin, and sugars, all of which are converted into energy. “There is no waste as all that is left becomes fertiliser for the next crop. The process is a second-generation biofuel with greenhouse gas savings of well over 60% above EC and government targets, unlike first-generation biofuels from rape and now wheat.”