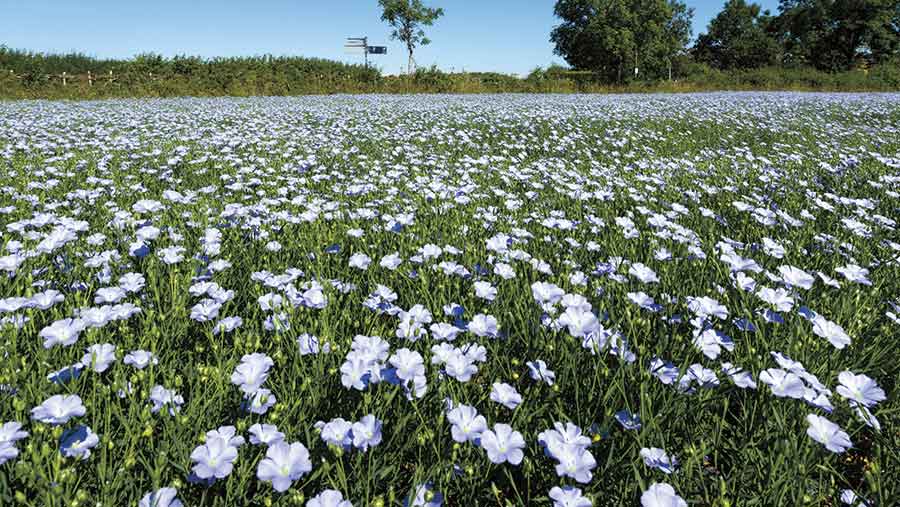 Ten new spring linseed varieties have been added to the AHBD descriptive list over the last two years, with many earlier to mature than veteran top-yielding variety Juliet, but none can outyield it.

Juliet, first recommended in 2001, leads the way on a yield at 106%, as well as having one of the highest oil contents. On the downside, its late maturity makes it vulnerable to difficult harvesting in a wet year – something every grower dreads.

There were six new varieties added to the list last year and a further four on the 2018 list, but only one has managed to match the yield performance of proven performer Juliet at 106% and the others fell short.

“Bingo is shorter and both earlier to flower and mature than Juliet, while Empress is earlier flowering but with the same medium maturity as Bingo,” he says.

Of the others to arrive, Aquarius should be noted for its early maturity and very high oil content, while Carina is medium-tall, has medium maturity and late flowering.

Galaad offers the combination of short plants, very early flowering and early maturity, and Mr Kightley says it could be an option for growers in marginal linseed areas.

Spring linseed has been part of the rotation for the last two years at the Hendred Farm Partnership in Oxfordshire, where it has replaced disappointing spring beans.

For farm manager Julian Gold, a pet food contract for the variety Altess was the incentive he needed to grow 40ha on some of the farm’s lighter land, with the crop yielding 1.37t/ha and 1.49t/ha.

Drilling took place towards the end of April, once soils had warmed up, but harvest didn’t start before late September and went on into October.

“The crop is reliant on moisture so it was hit by the spring drought in 2017. It isn’t a blackgrass cleaner, as it doesn’t compete well enough with spring germinating grassweeds, so we did have to spray some out in 2016,” he says

Mr Gold points out that spring linseed has come back into the rotation as part of his search for profitable, reliable break crops, after inconsistent performance from pulses.

“It held its own against winter beans this year, but we do need blackgrass breaks as well,” he adds.

The late harvest isn’t ideal. He says that in a good year, spring linseed works well and there are contracts available which takes some of the risk away, and it doesn’t require a high spend on inputs.

Spring linseed was replaced by its winter counterpart on a Devon farm some five years ago, due to its late harvesting date.

James Lee, who farms near Crediton in a family partnership, explains that an end of September harvest date didn’t fit in with the farm’s workload, so spring linseed was dropped in favour of the winter crop, which can be harvested in July and August.

“It was the only issue we had with it. It established well, was cheap to grow and always left the soil in good condition, allowing us to grow a very good wheat crop afterwards,” he says.

If yields are above the 1t/ha level and the linseed price is over £350/t, it can be an attractive break crop option.

“In the last few years, with the fall in the oilseed rape price, linseed became a better option for us,” he adds.

However, that situation has now reversed, with oilseed rape coming back into the rotation this year on the back of better crop values.

“It’s purely a case of economics. We would happily go back to linseed,” he adds.