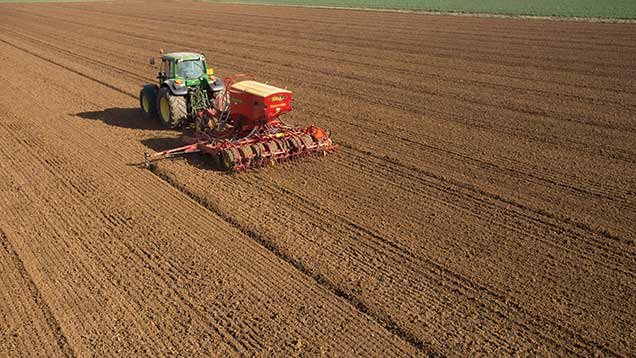 Spring cropping often increases in line with the difficulty of the previous autumn’s drilling – but this year is proving rather different.

The new three-crop rule, greening measures, and limited chemical tools for tackling blackgrass and flea beetles mean growers are looking at their spring drilling options, despite the open autumn of 2014.

According to The Andersons Centre’s early-bird survey, growers  plan to drill 5% less wheat this year, at 1.83m ha.

“This includes spring wheat, which anecdotally is reported to be contributing a larger proportion to the total wheat area than it has historically,” says farm business consultant Joe Scarratt.

Excellent drilling conditions, combined with recent good results from high yielding feed varieties, mean the winter barley area  is forecast to rise by 12% to 476,000ha, while the spring barley area is set to increase by 9%, to a whopping 713,000ha.

“As expected, pulses are forecast to see a significant year-on-year increase in area, projected up by 24%. This equates to 171,000 ha, the largest area since 2010,” says Mr Scarratt.

This is partly due to the greening requirement to create Ecological Focus Areas (EFAs), as well as the result of a couple of good years for pulse crops.

In the same vein, the area of fallow land is likely to rise by 18% to 189,000ha, both because of the EFA rules and poor profitability at current prices.

“However, some of this area may well be drilled in the spring,” adds Mr Scarratt.

The area of other crops on arable land  (such as potatoes, sugar beet, vegetables and forage crops) is forecast to rise by 2%, to 404,000ha, with big rises in maize and temporary grass leys to meet demand for livestock feed and from anaerobic digestion plants.

According Graham Redman, editor of the John Nix pocketbook, vining peas will once again be the top spring performer, with a forecast gross margin of £951/ha.

“However, marrowfat contracts are all booked, and other pulse crops may need extra time, care and skill to achieve decent yields and quality,” he says.

Of course, pulses do have the additional benefit of fixing nitrogen, providing about 50kg/ha of the nutrient to the soil for a following wheat crop.

“All spring crops are great for spreading assets (labour and machinery) so think carefully about replacement policies before buying new shiny kit this winter, as the way to get efficiencies up in any business is to keep resources running for longer,” says Mr Redman.

“This is very difficult on farms with short periods of hard work but spring cropping extends that effectively,” he says.

Spring malting barley has dropped down the gross margin rankings this year, to fifth place, at £526/ha, with spring wheat at £497/ha.

“The important thing is to take your spring crops as seriously as your winter ones,” says Mr Redman.

“More money can be lost by not farming spring crops properly – especially pulses – than winter cereals,” he adds.

Although the increased pea and bean area is likely to pressure market prices, they will still command a substantial premium to feed wheat, says Andy Bury, president of the British Edible Pulses Association.

Higher production will also attract buyers back into the market, including UK compound mills for ruminant and pig rations, and importers to Spain and Italy.

“Current feed bean contracts offer a premium of around £30-35/t over November wheat futures,” he says.

“As feed bean prices get closer to wheat values, demand from the aquaculture sector is increasing – salmon farming in Scotland and Norway requires a substantial supply of de-hulled beans and this is set to increase as the salmon market grows between 3-6% per year in UK waters,” adds Mr Bury.

Exports of human consumption beans to North Africa and the Middle East continue to rise, and growers should aim for this premium market, says Alan Wymer, pulse director at Saxon Agriculture.

“Fuego is the most established spring bean, although Fanfare and Vertigo are also liked by the Middle East buyers,” he adds.

Mr Wymer advises that it is worth looking at a min-max premium contract for human consumption beans, to avoid being locked in to a specific tonnage.

“If you are taking a fixed contract, don’t sell more than 2.5t/ha as a dry summer can impact on yields quite considerably,” he adds.

“There are some good marrowfat prices, but limited seed supplies will hold the potential acreage back,” he adds.

“Beans do have to be bruchid free – there were big problems with bruchid and chocolate spot this year, and anything that ends up as feed is not worth an awful lot,” he says.

“There are some very good pea varieties out there, but there are still peas in store from last year – there are just not enough buyers out there, which is disappointing,” Mr Neale adds.

Other options include niche crops like borage and human consumption linseed. “But the contracts are probably already tied up because the markets are so limited,” he says.

“The neonicotinoid ban is a big issue. You want to drill when there is a warm seedbed, just at the time flea beetles are about. If you can get the crops established and away, and are happy with the late harvest date, then fine, but with such a high cost of planting you want to be very cautious,” he says.

However, a lot of growers still haven’t made up their mind on which crop to drill.

“There are still people erring between late-drilled winter wheat, spring wheat, and spring barley,” he adds.

If choosing a late winter wheat, ideal options are high yielding milling wheats Xi19 and Crusoe, while the most popular spring wheat will be Mulika, says Mr Neale.

Growers should also not discount oats as a break crop, as they are so cheap to grow, he adds.

“However, if you have blackgrass there may be chemistry challenges, and consumer demand is dropping, with the exception of naked oats which have a growing market,” he says.

“There are a lot of new growers moving to spring barley – it’s got a lot to offer as it’s low cost and has a good market driven by Chinese demand – but they must do their homework on end market opportunities,” he adds.