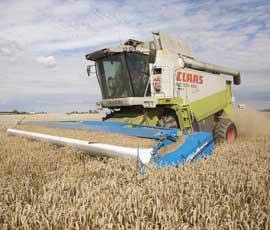 If you’ve always drilled a winter wheat after root crops, or are looking for a late autumn sown option, it could be time to reconsider your strategy.

The latest batch of spring wheats, some of which come with innovative market contracts, all challenge the concept that it’s better to sow a winter variety if you can.

Their high yields – often just as good as those of established winter varieties – together with respectable agronomic characteristics, mean that the gap between winter and spring types is closing fast.

“Certainly, the yield gap has narrowed,” says independent variety consultant Richard Fenwick. “But there are differences between them from late autumn sowings, so it is worth looking at the detail.”

Last year saw the arrival of Mulika, the first Group 1 spring wheat for some time. With the added bonus of being the only bread making wheat with orange wheat blossom midge resistance, it sets new standards in a category that had been reliant on Paragon for 12 years.

“Interestingly, Paragon is one of the spring types which doesn’t perform well from a late autumn sowing,” reports Mr Fenwick. “So if you’re after a quality variety from this sowing date, it’s between Mulika and Tybalt.”

“And it has the flexibility that it can be planted in the autumn,” he points out. “In that late sown slot, it outyields Solstice by 2% and Paragon by 7%. It also has much better disease resistance than Solstice.”

He disputes the notion that spring wheat is an emergency fall back for when drilling gets delayed or plans go awry. “There’s been considerable progress made with varieties. The latest HGCA Recommended List shows that they are bringing real benefits.”

Indeed, the late autumn-sown wheat list for 2012-13 has Mulika, KWS Willow and newcomer KWS Alderon all holding their own in their respective groups. With yields ranging from 102% to 110%, they are in first or second place in their market sectors.

David Waite of Frontier Agriculture believes growers should take a closer look at Mulika. “If you know you can get the quality, then it’s the right choice and there are contracts available. There’s good demand for the end product.

“Otherwise, this year’s hard feed addition, KWS Alderon, will certainly give you yield.”

At Openfield, contracts on two specialty wheats, Zircon and Heroldo, are being offered.

Lincolnshire grower John Hollis finds that the drilling window flexibility that spring wheat offers makes it the right cropping choice for his farm, for use after sugar beet.

For the last two years, he has grown the white wheat Zircon on contract for Weetabix, drilling it any time between October and March, according to lifting progress.

“Beet lifting, often hand to mouth, dictates when we can get it in,” he says. “The only restriction with spring wheat is that it can’t go in too early. But from mid October onwards is fine.”

This year’s contract through Openfield, will deliver £30/t over feed wheat if the specification is met. That stipulates grain with 11% protein, 74kg/hl specific weight and 225 Hagberg, along with a mycotoxin limit of 700ppb deoxynivalenol and no sprouted grains.

“But there is a fall-back position with a lower premium of £25/t,” reveals Mr Hollis. “It allows for a lower Hagberg.”

He adds that Zircon has good disease resistance and has been quite vigorous. “It can get tall and leggy, but we haven’t had any lodging in it to date.”

Last year’s better yields were 8.7t/ha behind November lifted beet. “Much depends on the seed-bed. But it is up there with winter wheat in terms of yield. Even last year’s cold winter didn’t trouble autumn-drilled ‘spring’ wheat.”

Sprouting is one of the potential downsides with Zircon, he admits. “For this reason, it needs to be prioritised at harvest. In our first year, we did see some sprouting, but fortunately we retained the premium.”

Uneven maturity can be a problem with cobbly seed-beds after beet. “Lighter areas are ready to be harvested, but waiting for the stronger patches to ripen is a dilemma, as the sprout risk increases on the former.”

See the Digital edition of Crops for a free, interactive spring cropping margins calculator. Type in your own prices and costs, or use the default figures from John Nix, and see how the different options compare for your business at