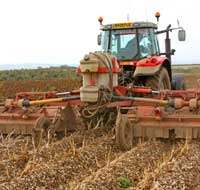 Recent wet weather has allowed crops to put on a late growth spurt by using nitrogen that was applied earlier in the season and sat dormant through late June and July, says John Sarup, senior potato consultant for SAC.

“We are seeing some big canopies late on, particularly in the east where it was so dry early on, and they have expanded considerably this month.”

Growers in this situation should plan for a three-pronged attack as traditional two-spray approaches will not be sufficient in most cases, he suggests.

“Where the canopy is big and the crop is not senescing naturally, two just isn’t enough. If flailing is not an option, plan for three sprays and if you can get away with two that’s fine.”

A low dose of diquat at 1.5litres/ha should be applied first to open up the canopy, he says. “Adding some of the blight fungicide Ranman (cyazofamid), which contains a sophisticated wetter, to this mix seems to improve product coverage and give better penetration.”

Choosing a nozzle that gives good penetration into the canopy and spraying at no less than 200litres/ha water volume also improves efficacy, he advises.

“Five to seven days later, when the diquat has taken the top out of the canopy, go back in with 2-2.5l/ha diquat for the main burn down.”

Another five-to-seven days later once the diquat has stripped the leaves, 1 litre/ha Spotlight (carfentrazone) should be applied to desiccate the stems, he adds.

Growers who are happy to flail, should do so in place of the main diquat treatment, he says. “This is not just a trim. You need to take it down to 6-10 inches, to fully strip the leaves and expose the stems.”

If haulm gets wrapped around the stems, growers should leave it to dry fully before applying the Spotlight treatment. “These are not cheap options, but it’s essential to get it right.”

Agrovista agronomist Andy Steven reckons growers should try and avoid the situation in the first place by managing nitrogen earlier in the season. “It’s not easy to get right, but you need to start thinking about nitrogen in February, not July. Apply a decent dose to get the crop going and then manage nitrogen with foliar applications. But don’t apply anything after tuber initiation.”

But Mr Sarup reckons earlier nitrogen applications are still the best option. “I wouldn’t want to use too much late foliar product as late nitrogen tends to bulk up the canopy rather than the tubers, however it does depend on the variety.”