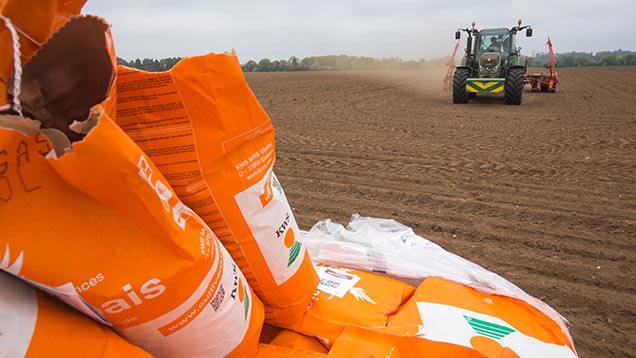 Ensuring the ground is weed-free by the two- to three-leaf stage of your maize crop is crucial to minimise crop competition and deliver bumper maize yields.

After a cold start to spring, soil temperature has taken time to warm up, and as it hits 10C, drills will begin rolling out into fields to get the crop established.

There is an increasing interest in maize as the anaerobic digestion (AD) sector grows and arable units in the east of England look for a spring break to tackle blackgrass.

For many, maize remains a livestock feed, but whatever the end use, experts agree that early-season weed control is the most critical element to get the most out of crops.

In the past, maize growers have used just one cheap-and-cheerful post-emergence spray to take out the range of spring germinating broad-leaved weeds and grassweeds.

However, Simon Draper, maize agronomy expert with the Maize Growers Association, says that the safest option is to kick-off the programme with a pre-emergence spray to hold weeds back.

“If weeds are still present at the two- to three-leaf stage then you are likely to see yield losses of about 15%, so all the emphasis should be on early control.”

Mr Draper says BASF’s Wing-P is the strongest option at the early timing, while in dry conditions Dual Gold + pendimethalin would have better activity.

“You don’t necessarily have to invest in the best products though. I wouldn’t be worried about 100% control as you can tidy up with a post-emergence application,” he adds.

Neil Groom, technical director at maize specialist Grainseed, agrees that pre-emergence applications are the best way of trying to keep the crop weed-free during the first six weeks.

However, if it is dry he believes it might be better to hold off and wait to see what comes through in the crop, as it is vital that residual-type herbicides have soil moisture to be at their most effective.

“If there are some heavy dews, or we get some light rain showers, then get them on, and using a wetter could help increase activity.

“Growers should also assess the field history and weed burden, and where there is a known high weed population, you could use a cheaper pre-em spray, such as Stomp, as you know you will have to come back in with a post-em,” explains Mr Groom.

If the opposite applies and the maize is drilled on land with a low spring germinating weed burden, a strong pre-emergence product at a high rate could be sufficient.

“In that situation, you would hope you might get away with a one-spray programme, but that is only likely on virgin maize ground, as weeds such as black nightshade can keep germinating until June,” he says.

Mr Draper emphasises the importance of applying any post-emergence sprays before the two- or three-leaf stage of the crop and when the weeds are small.

“We should be more interested with the size of the weeds and getting in early, because if it slips then you could lose a lot of yield,” he adds.

With growers using maize as a blackgrasss-busting crop, stale seed-beds and pre-drilling glyphosate should be the first line of attack, but hitting it hard with the available chemistry is advised.

In these situations, both Mr Draper and Mr Groom agree that a pre-emergence spray to soften up the blackgrass and a top-performing post-emergence spray would be a wise investment.

“Where you have blackgrass, you really need to try to get the most out of your herbicide programme, so I would opt for full-rate Wing-P at pre-emergence and full-rate Maister post-emergence.

“Both together should do a good job, but the Wing-P application will be particularly important where you have an ALS-resistant population present,” says Mr Draper.

John Vickery, Agrii’s western region technical adviser, had some experience using Maister last season and was impressed with the product’s performance against key grassweeds such as blackgrass, ryegrass and annual meadow grass.

He says tank-mix options compatible with the product will also give growers more flexibility.

“You can use Callisto or Buctril to broaden the broad-leaved weed spectrum, but if you require extra residual activity for late-germinating weeds, Callisto will offer that,” adds Mr Vickery.

“But if you need faster knockdown or cranesbill is a problem, Buctril could find favour.”