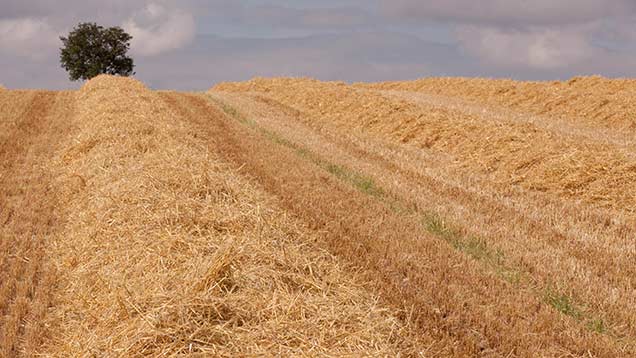 Standing straw prices have dropped for the second year running, reflecting a lack of cashflow on many livestock farms and a high carryover from last harvest.

Greg Ridout from Symonds and Sampson, based in Yeovil, Somerset, said prices were down by an average of £10-£15/acre at the company’s recent sale of 8,000 acres from 36 farms in the Blandford area in Dorset.

Wheat had averaged £30.50/acre, spring barley £25/acre and winter barley £35/acre. However, another sale of 600 acres south of Dorchester had realised values £10/acre higher than these.

“Cashflow is tight and people were saying there is not enough money around to pay more for it,” said Mr Ridout. “There is also a huge amount of straw left in sheds from last year that has depressed the market.”

West Country firm Stags reported it had sold 2,034 acres this season, which included three new instructions and was up 413 acres on last year.

The best trade had been at its first auction at Affeton Castle, East Worlington, Crediton, where several new buyers drove winter barley to £77/acre (averaged £74.40) and winter wheat to £60/acre (averaged £56.07).

But averaged across all its sales, the firm said trade had been more difficult, with prices down £12/acre overall, which was on top of a £15/acre drop in 2014.

Bernie Hutchinson of Barbers Auctions, based in Market Drayton, Shropshire, said some lots had remained unsold at the firm’s sale of more than 2,500 acres last week.

“It was making nearly £10/acre more last year. People were saying they have a lot of carryover from last year and they haven’t got the money to pay for something they aren’t going to use until winter,” he said.

A further 157 acres of barley – a mix of winter and spring varieties – had averaged £44/acre, with the best crop going for £53/acre.