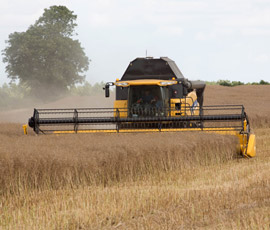 Guy Smith is starting to combine oilseed rape today (1 August) at Wigborowick Farm, St Osyth, Essex, but is a little concerned over its varied maturity.

“The seed looks quite red in the sample; because it’s so late and variable in ripening, it’s difficult to judge,” he said.

“But we’ve had some crush tests done, and we are now confident that it’s within the necessary standards.”

However, it was too early to tell how it was yielding, he added. “We only got into it two hours ago.”

“We had 5mm of rain on Monday, but my wife drove down from Norfolk today and there are a lot of combines going ahead of the forecast showers tomorrow. Most of them are in barley, but a few are starting oilseed rape.”

However, further north at Eye, Cambridgeshire, Gary Mills was still some way off combining at Haynes Farm.

“There’s not a lot cut in the area yet – some people will be into barley and rapeseed in a few days’ time, but we won’t be starting until the end of next week,” he said.