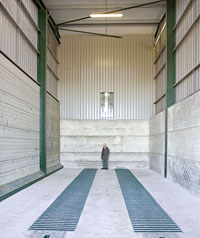 The grain store installed at a Buckinghamshire farm this year could not have come at a better time. But its impact will go a lot further than the difference it made to coping with its debut harvest.

If ever there was a good year to have a new grain store up and running in time for harvest, this was surely it. And if ever a store was geared to coping with a big influx of wet grain, the new installation at Creslow Manor Farm certainly fits the bill.

“As luck would have it, we put a lot of emphasis on having plenty of intake capacity and quick trailer turnarounds,” says grower Brian Lear. “That made a real difference when all we were bringing in was a lot of very wet grain.”

The over-riding purpose of investing in the new store was to overcome the difficulties inherent in sharing facilities on a neighbouring farm and having to store grain in three different locations.

Centralising facilities for the 650ha (1600 acres) of winter wheat, oilseed rape, oats and spring barley grown at Creslow Manor Farm made the 2008 harvest and subsequent operations a lot easier to manage and eliminates a lot of double handling.

Moreover, it will have a big influence on future cropping and marketing options and it has been future-proofed as far as possible in anticipation of yields and acreage continuing to increase.

“We now have a fully automated central drying, cleaning and storage facility that’s easy to set up and can be left to get on with the job with confidence,” says Mr Lear. “We’ll be growing milling wheats instead of just feed varieties for the first time, and we won’t be under pressure to sell grain because we can’t dry or store it.” 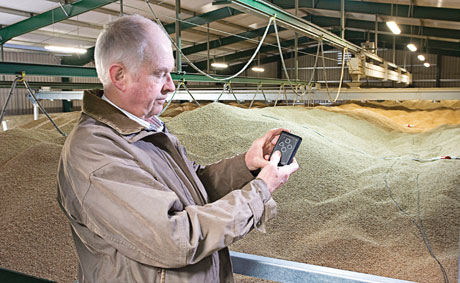 With an eye to growth, the 3000t store has been built to one end of its allocated plot and with all machinery at the far end of the building. The near-end steel framework is up to the spec needed to allow the store to be extended.

Similarly, there is extra capacity to be had by converting the lean-to down one side that provides welcome undercover storage for much of the farm’s field machinery.

“We’ve also taken account of the potential for expansion inside,” notes designer and project manager Mike Williams of Tripp Batt. “The Skandia conveyors and elevators installed have a nominal capacity of 40t/hr, but are suitable for up-rating to 60t/hr with new flights and bigger motors.”

As it is, with plenty of holding capacity at the intake – but without the problems that can arise with wet bins – drying can get under way once a buffer of grain has been built up and run continuously over long periods to achieve high daily throughputs without interruption.

Having seen the way even the best galvanised dryer suffers in time from being exposed to the elements, Mr Lear was determined his new mixed flow dryer would be housed indoors.

Sitting between the dryer and the intake elevators is an aspirated screen cleaner that can be used to remove wasteful rubbish, improve Hagbergs and specific weights and provide opportunities for some contract cleaning.

The novelties in this store begin with the intake.

“I didn’t want a pit because they’re never big enough, they never empty fast enough and they’re difficult to clean out properly, so you always end up with a nasty mess in the bottom,” says Mr Lear.

Instead, he opted for an undercover concrete-lined “tip and go” bunker that clears fast and can hold up to 140t of grain if necessary.

Two trench conveyors with variable speed control, each capable of shifting grain at up to 20t/hr, clear the pile from closest to the shutter door first and because they are spaced to match trailer axle track widths, two tramlines quickly clear ready for the next trailer load to be backed in and tipped.

“The intake is always a potential bottleneck in a grain store, either because trailers have to wait for the previous load to clear or because there is simply not enough handling capacity,” says Mr Lear. “This set-up worked a treat this year the speed of the trench conveyors can be adjusted to match the dryer throughput, so there was no overflow grain circulating through the system and there was plenty of floor space to pile up the grain under cover.”

One of the main challenges for Mr Williams was to create a flexible handling system that accommodated the two intake conveyors while allowing grain to take different routes into the store. Yet it also had to be simple to operate and take up as little as possible of available building space.

“I wanted this flexibility to suit different crops and circumstances,” says Mr Lear. “We feed the screenings to our beef cattle, so everything needs to be dried when the wheat and barley come in wet. But for oilseed rape, it’s obviously better to take out the rubbish first and then dry it.”

Beyond the cleaning and drying section, which is sealed from the storage area to contain the inevitable dust, grain heads along a fixed conveyor extending half way along the length of the store before flowing into a reversible open trough conveyor positioned in-line beneath it.

This motorised conveyor can be powered forward and back to access the full extent of the storage area and, if required, to send grain from the dryer and/or cleaner straight into a discharge chute in the far end wall – useful for drying or cleaning someone else’s grain or dispatching grain being sold off the combine.

Normally, however, this conveyor discharges into a lateral level-fill conveyor that can run the full length of the store on rails to make maximum use of the 4.8m storage depth provided by the concrete thrust walls.

“I particularly like the remote control for this system,” says Mr Lear. “I can stand on a platform at one end of the store and use a small hand-held wireless controller to position the conveyors wherever they’re needed.”

There is also a high degree of automation provided by the control system installed by Kentra Grain Systems. Apart from main power switches and emergency stop buttons, all the operator is confronted with is a map of the system and two touch-screen panels – one for the dryer, one for the handling equipment. 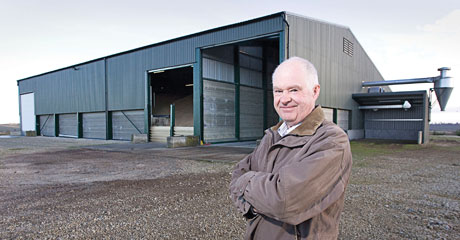 The steel-framed 3000t grain store and cleaning/drying plant has been positioned and specified such that it can be extended in future. The lean-to down one side provides welcome undercover storage for machinery, but could be converted for grain storage

“The controller for the handling system has been programmed with five different routes so all the operator has to do is choose where he wants the grain to end up,” says Barry Higginbottom of Kentra. “Once that’s been selected and each of the three flow valves is correctly set, the system will automatically start the conveyors and elevators in the correct sequence.”

The flow valves are manually set, but carry sensors that prevent the system starting up if they are not in the correct position for the chosen route.

“It’s pretty much foolproof and very easy to use,” says Mr Lear. “But human nature still makes me go and have a quick look to check the grain’s going where I wanted it to.”

Another attraction compared with a hard-wired installation is that the control program can be easily updated if the handling set-up is changed in any way.

In fact, during the Crops tour of the facility, Mr Higginbottom plugged in his laptop and added the fifth handling route in a matter of minutes.

Touch-screen controls also set-up and operate the Kentra continuous flow dryer and both this and the handling system controller is linked to a text messaging system that sends an alarm message whenever the store has automatically shut down for some reason.

“It’s very reassuring being able to get on with other management and field work knowing that I’ll get a call if a batch of drying or cleaning has been completed or if something goes wrong,” says Mr Lear.