The dream of a tractor that can run – without engine alterations – on fuel produced on the farm took a step closer to reality last week with Steyr’s launch in Austria of a standard 200hp tractor powered by biogas.

The company, part of Case IH, showed a prototype that uses a 50:50 mixture of diesel and biogas. It claims that the tractor – based on the CVT transmission Steyr 6195/Case IH CVX 1195 – can cut fuel costs by 40%.

The 400 litres of biogas is stored at high pressure (207bar) in roof tanks and is enough for a 7-10hr working day. And if there’s no biogas available that day, the tractor can work just as efficiently (and without adjustment) on a diesel plus natural gas mix or on diesel alone.

“The biogas reduces CO2 emissions from the 6.6-litre engine by 20% and nitrous oxide emissions by 17%. Hydrocarbon and carbon monoxide outputs are down by 87% and 97% in our tests.”

In theory, every farm with a biogas plant – 3500 in neighbouring Germany alone – now has the key to a large slice of tractor fuel self-sufficiency right on its doorstep. 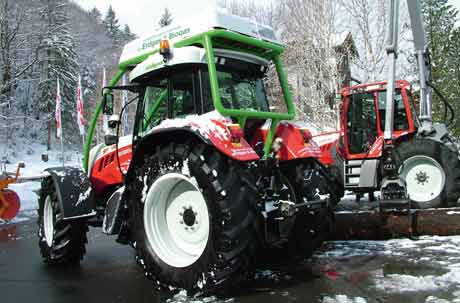 Well, almost. The fact is that the raw gas has to be processed before it can be used in an unmodified diesel engine. This is not complicated and is already being done on an increasing number of Austrian farms, where the home-grown gas has to meet commercial natural gas standards of low-moisture content and low sulphur if sold straight to the natural gas supply grid.

But the appropriate filtering and compression system adds a “few thousand” pounds more to the €20,000 cost of the extra tanks and input system, either on a new Steyr (or Case IH) or retro-fitted on an older model.

“Taking everything into account, we reckon that the cost of system could be repaid through fuel savings on a crop-growing farm within seven years,” says Steyr business director Rudi Hinterberger.

The system is pretty simple. Gas passes from the roof tank through stainless steel piping to a control valve and electronic management unit on the engine air intake system. The inlet point for the gas (now at 4-5bar pressure) is just before the turbo to fully exploit the mixing effect.

The engine is started on 100% diesel. Once it’s warmed up, the driver presses a button in the cab to activate the gas system.

A disadvantage at the moment is that the prototype tractor has to go a considerable way before finding a biogas supply out in the countryside. “We’ve got 88 biogas plants in the area where the tractor was developed, but only two have a gas filtering and processing plant added, although we expect this number to multiply fast. Another eight farms plan to add a filter plant in 2009.”