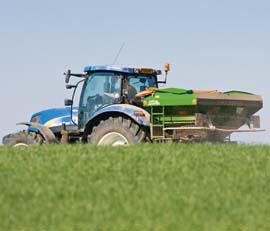 Growers are being advised to stick with their spring nitrogen fertiliser plans for cereal crops amid concerns the continued dry weather is hindering crop uptake.

Winter rainfall up to 30 March has been below average in most of the UK (see maps), after one of the driest March’s since 1953.

Will Gemmill, an agricultural consultant for Strutt and Parker, says that conditions are “painfully dry” on some light lands and the timing and rate of nitrogen applications may have to be reconsidered, “especially if we get a dry April”.

But he warns that holding off second nitrogen applications now may result in a yield penalty.

“I’m not convinced growers should be cutting back on their nitrogen fertiliser applications at this stage,” he says. “This year, most people have bought nitrogen early and at good value and because crop prices are high, you want to be pushing for high yields.”

Mr Gemmill, who covers East Anglia and Kent, says wheat crops are slightly backward and many second and continuous wheats have already received their second applications of nitrogen to push them on.

“Many only reached growth stage 30 by the end of March, two to three weeks later than usual,” he says.

“There is low lodging risk and the good dry spell means ground is ideal to travel on.

“If you don’t get on now with your second nitrogen applications, you run the risk of too long a time period between applications, which could make the crop go hungry and you could lose yield.”

Another consequence of the lower rainfall this winter is that leaching losses are likely to be lower than normal this season, says ADAS soil scientist, Peter Dampney.

Therefore, many growers may need to use a different RB209 soil index table when assessing the soil nitrogen supply.

“Also, parts of Cambridgeshire and Lincolnshire have had very little excess winter rainfall so nitrogen leaching losses will be low.”

Some data indicates that soil nitrogen levels in autumn 2010 before winter leaching are slightly lower than normal. The cold weather is also likely to have delayed the mineralisation process, which coupled with the reduced leaching, means the contribution of mineralised nitrogen may be greater this year, he adds.

“This, combined with the low rainfall, means that soil nitrogen levels this spring are likely to be close to average.”

But previous cropping and organic manure will have a bigger impact on nitrogen fertiliser use than season, notes Mr Dampney.

“Farmers should ask themselves what was the previous cropping and whether organic manures have been used,” he says.

“The use of organic manures can result in fairly high residual levels of soil nitrogen, which will carry through to the following season, especially in a dry winter like the one we’ve just had.”

And crops like oilseed rape tend to leave behind bigger soil nitrogen residues than sugar beet, he adds.