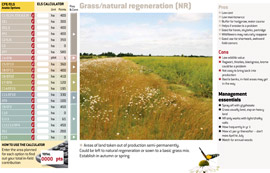 Growers have until the end of this month to stablish skylark plots in winter cereals by spraying out areas with glyphosate, say Campaign for the Farmed Environment partners.

Plots should be established in emerged winter cereals by 31 December.

RSPB senior agriculture advisor Richard Winspear says skylark plots can be a valuable option in ELS and a simple way to support the campaign.

“Two 4x4m plots per hectare, totalling less than 0.33% of the field area, is the optimum density. Each plot is worth five points in ELS. This doesn’t sound much but when you think that 100 plots in a 50ha field pays you £500 a year but only takes up 0.16ha, it is a much better payment rate than any other ELS option – equating to £3,125/ha,” he added.

After establishment, plots do not require any special treatment and can be managed exactly the same as the remaining field so it can be over-sprayed, fertilised and there’s no requirement to keep them weed-free. For those outside any agri-environment scheme, skylark plots can be established voluntarily under the campaign’s voluntary measure (code C4) and recorded using the online record form at www.cfeonline.org.uk.

Skylarks use the plots for nesting sites as they extend their available breeding season with 50% more chicks produced in winter cereal fields containing skylark plots compared with those without. From mid-May onwards, the sites are used to forage for insects to feed chicks, especially second and third broods.

Stem elongation of the cereal crop prevents them from foraging effectively over the rest of the field area, so the plots become a safe haven.

• For more information on the Campaign for the Farmed Environment, see our interactive guide, which includes a handy ELS/CFE points calculator. See how many points you could earn by including skylark plots (C4/EF8) in your ELS measures at www.fwi.co.uk/cropsdigital 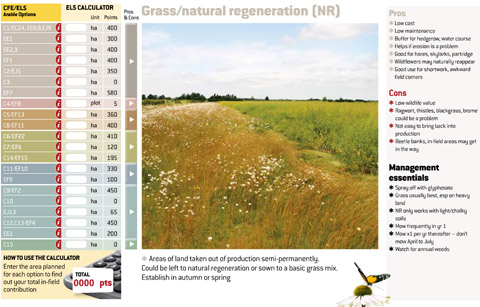