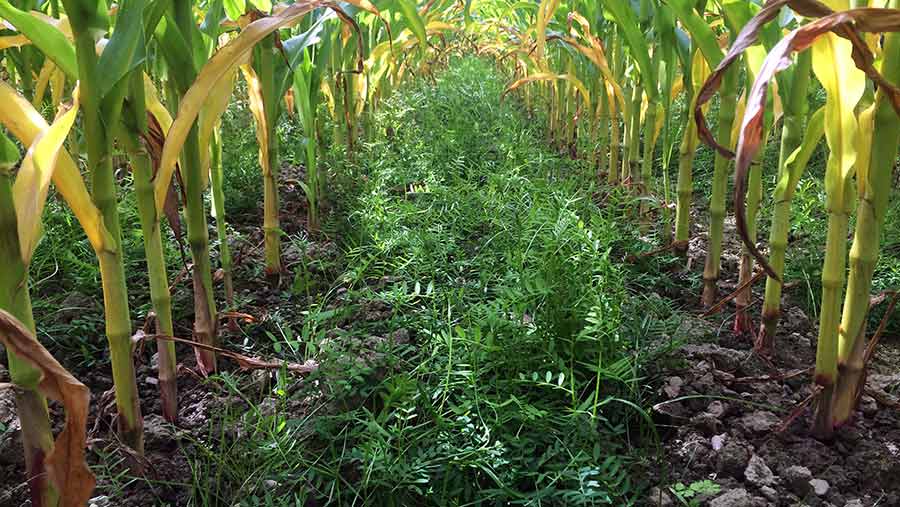 Improving soil structure can be a win-win for growers, who can reduce the risk of depleting fields of precious topsoil and the likelihood of being in breach of cross-compliance legislation (see ‘What does the law on soil erosion say?’, below).

Finding a site which will allow mid-April drilling, and selecting an early maturing variety will bring forward harvesting dates and reduce the chance of having to harvest in poor weather, says John Morgan of the Maize Growers Association.

He says although trial data shows there is a modest reduction in fresh-weight yield from planting earlier, the improvement in dry matter will compensate for that, and advised growers to seek variety advice from an independent maize agronomist.

Another way of bringing forward harvesting is by using plastic film during establishment, Mr Morgan says.

The technique is generally used only on marginal land as the cost is significant – approaching £300/ha, but he explained it will bring silking (flowering) dates forward by an average of 16 days and increase crop yield and quality.

Reducing nutrient run-off can also be achieved by not applying unnecessary fertiliser in the first place, says Mr Morgan. Applying as little as possible beyond what the crop needs will mean there is less available to be washed away.

Growers ideally need accurate knowledge of the nitrogen supply from the soil, the previous crop, and any slurry before getting the fertiliser spreader out to top levels up to the optimum 150kg/ha.

He warns that using book values such as those from the RB209 manual should be a last resort, and analysis of soil and slurry by testing is much more accurate.

Soil pH is also critical, as maize will not take up nutrients as efficiently in acid soil. At a pH of 5, the crop will only be able to take up 33-50% of the nitrogen, phosphate, and potash available, but at pH 7, it is able to take up all of the nutrients available.

As a rule of thumb, tyre pressure is equivalent to the force which is being put on the ground, says Mr Morgan.

Traditional super singles are still a common sight on harvest trailers, and with air pressures of up to 90psi they are the worst compaction causers.

There are many types of flotation tyres now available on the market with significantly lower pressures, with the lowest now at under 10psi, although the best may cost significantly more.

Research has shown the best way to reduce the risk of water run-off from overwintered maize stubbles is to chisel plough straight after harvest, but it does nothing to reduce nitrate leaching down through the soil profile, says Mr Morgan.

Failure to put in place a management strategy for winter maize stubbles is likely to increase water run-off and consequently cause greater soil erosion and nutrient pollution, he warns.

On land prone to nutrient loss, the best option is to establish another crop which can continue growing through the winter and take up soil nitrogen.

Establishing a cover crop after harvest can eliminate the risk to maize yields and be simpler than working between the rows, but trial work shows the crop has lower biomass and is therefore less effective at preventing leaching.

Growers have traditionally been reluctant to get crops growing alongside young maize as the fledgling crop is not competitive until it starts its rapid growth phase, but an increasing number of alternatives are emerging in the UK which can overcome this hurdle.

Research in Denmark has shown the best compromise between establishing a viable grass crop and preserving maize yield is to establish three rows of grass between each row of maize four to six weeks after maize planting, and the Wye Usk Foundation have also been researching it with a view to preventing soil and nitrate run-off into the River Wye.

Dairy farmer Brian Chandler has been experimenting with establishing grass in his maize crops for 10 years after a wet winter caused significant soil erosion on a harvested field despite it only having a slight gradient.

“Look at your farm and what you’re trying to achieve”, says Mr Chandler, explaining there is not a one-size-fits-all solution and growers need to choose the method that is simplest and most effective for them.

At Hurst Farm, part of the Moreton Estate, their first idea was to mount a grass air seeder on a harrow frame which had been adapted to fit on the loader.

The seed was broadcast forward below the crop canopy into deflector plates which spread it between the rows. After some experimentation, they realised they needed more seed-to-soil contact so subsequently added three rows of following harrow tines in each row.

Other methods under scrutiny include a more traditional rear mounted Browns 6m spring tine grass harrow with an air broadcaster, with the tines adapted so as not to disturb the maize.

They have also looked at saving a pass by establishing the grass seed with a post-emergence slurry application through a 24m dribble bar system.

Slurry was brought to the field in a nurse tank and a valve with a funnel was added to the discharge pipe between the two tankers to add the seed to the slurry.

“A higher seed rate is perhaps more critical than the method of establishment”, says Mr Chandler, who recommends farmers use both the cheapest seed and simplest equipment available to them.

Control areas on his maize fields where no grass was established show clear evidence there will be lower rates of water infiltration as the soil has capped, causing it to break apart horizontally rather than vertically when put under pressure.

What does the law on soil erosion say?

To qualify for your full BPS payment or any payments under greening or agri-environmental schemes, you must comply with cross-compliance legislation (pdf) which includes the following good agricultural and environmental conditions (GAEC’s) for soil:

John Morgan, (Maize Growers Association) was speaking at an event hosted by Dorset farmer Brian Chandler along with the Farming and Wildlife Advisory Group and Wessex Water.