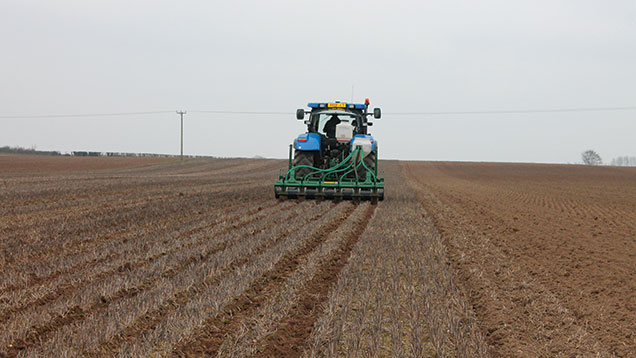 Establishing sugar beet by strip tillage can reduce establishment costs by one-third while also lowering the weed burden and improving soil health, according to industry experts.

In a review of strip tillage use in Europe and North America, Niab Tag’s Nathan Morris has identified the benefits that can be gained and the implications of using the technique in the UK sugar beet crop.

The aim of strip tillage is to produce a narrow, residue-free, cultivated zone that is suitable for drilling crops into while leaving a significant area uncultivated, explains Dr Morris.

“One advantage of this system is that the 15-30cm band of uncultivated soil will not encourage broad-leaved weeds to emerge.

“Similarly grassweeds will not emerge from depth and any emerged weeds can be targeted between the rows.”

Aside from the additional savings in fuel and time, Dr Morris believes the main draw for growers trying the technique in the UK has been around conserving soil protection, especially reducing erosion by water or wind and maintaining soil health.

“There are also advantages in not depleting earthworm populations as happens with a plough-based system.”

Operating at the correct depth and timing relative to soil type ensures the best tilth is created and prevents root growth being inhibited when it reaches the boundary of the tilled strip and the potential for the formation of fanged roots.

Evaluating work from abroad, Dr Morris has identified which soil types and timings are most suitable to get the best from the technique.

“There is a definite advantage on sands and Fen soils that are subject to wind blow, and can negate the need to establish a barley cover crop before the sugar beet is drilled,” says Dr Morris.

“There is also a benefit on medium soil if it fits with other technology on the farm.”

But the biggest challenge is on heavy soils, with more than 35% clay content, where the technique is of limited value due to the tendency to create a slot rather than a tilth, he explains.

“In wet seasons water can fill the slot the seed goes in to, leading to anaerobic conditions.”

Therefore, the timing of cultivations is critical to the success of the technique, he stresses.

Based on European results, Dr Morris recommends that on heavier soils strip tillage is carried out once in the autumn at a depth of 15-25cm, then left to overwinter, strip tilled again to freshen up the strip at 6-8cm depth one to two weeks before drilling and then drilled.

Lighter soils do not require the autumn cultivation; instead the strip tillage is carried out at 7-11cm depth two to four weeks prior to drilling.

In addition RTK guidance is essential, he adds.

There may also be fertiliser savings through placement of P and K in the strip via a secondary delivery.

Results from Germany and North America suggest the overall amount of fertiliser required could be reduced, and by improving uptake efficiency, reduce the risk of nutrients being removed to ground- or surface waters and help mitigate pollution risks.

But in UK trials he has observed a much greater variability in yields compared with a plough-based establishment system, with lighter soils less affected than medium soils, despite optimising depth and timing.

Hutchinson’s Dick Neale hasn’t found any detrimental effects on yield with the strip tillage equipment he has been trialling over the past two seasons with growers.

Using a custom-made Cousins double-depth Micro-Wing, establishment levels have been higher, with up to 21% increase in plants/sq m in some cases.

This season he has compared the Cousins double leg with the Stripcat and so far can see no discernible difference.

Test digs and larger-scale yield evaluations have confirmed that there is no appreciable difference and less variation in yield compared with a plough-based system, but it is much cheaper, he says.

Further savings can be made on herbicides too, especially using the Micro-Wing, which cultivates a 10cm strip rather than the Stripcat’s 18cm strip, leaving a wider band of undisturbed stubble.

“Weeds only really germinate in the cultivated strip, so keeping that to a minimum makes most sense.”

“Weeds only really germinate in the cultivated strip, so keeping that to a minimum makes most sense.”
Dick Neale, Hutchinson

This means improved control of broad-leaved weeds and blackgrass, the Achilles’ heel in the rotation for medium land growers.

“Every year is different, but generally we find lower weed pressure and we can achieve one less herbicide spray because we are not waking the weeds up.” And that puts less stress on the crop too, he adds.

The technique may also require a change in nitrogen management, as research in other crops demonstrates that strip tillage reduces the loss of nitrogen from the soil over the winter, via reduced mineralisation and leaching compared with the plough, says Mr Neale.

This may mean changing the rate, timing or application type of fertiliser to account for the lack of early mineralisation.

“And I believe placement fertiliser is a must with strip tillage,” he says.

With the future viability of the crop called into question following recent price cuts, growers will be looking for ways to maintain yields while reducing costs.

And although it is not a crop growers are willing to invest a lot of technology spend into, working in conjunction with variable-rate drilling, precision weed control and placement fertiliser could make further efficiencies where strip tillage technology can be used elsewhere in the rotation, says Mr Neale.

Boston farmer and contractor Jonathan Priestley invested in strip tillage three years ago, and interest in the technique is increasing each season as growers focus on maintaining soil health and keeping on top of weed issues.

His 12-row Stripcat established 400ha of oilseed rape and 100ha of sugar beet this year and he can now establish sugar beet in half the time in comparison with using the plough, as well as saving 30-40% on establishment costs.

“But it’s not all about saving money on time, fuel and labour; there is a good list of benefits from using this technique,” he says. “There are advantages of stopping wind blow, keeping moisture within the crop and the mulch between the rows stops evaporation as well.

“Blackgrass is a hot topic at the moment, too and because we are not cultivating all the soil, we are eliminating some of the pressure between the rows by not stimulating germination in the spring. The same applies to weed beet, and strip tilling eliminates a good proportion of it.”

“Blackgrass is a hot topic at the moment, too and because we are not cultivating all the soil, we are eliminating some of the pressure between the rows by not stimulating germination in the spring. The same applies to weed beet, and strip tilling eliminates a good proportion of it.”
James Priestley

Mr Priestley uses the Stripcat on a range of soils, from sands right through to heavy clays, and on lighter soils the strip is pulled a day or so before drilling.

On heavier soils he goes in the autumn and the slight birm (raised pyramid of tilth) created by the Stripcat overwinters down to just above the level of normal cultivated land, and is then refreshed in front of the drill.

His 12-row Stripcat established 400ha of oilseed rape and 100ha of sugar beet this year and he can now establish sugar beet in half the time in comparison with using the plough, as well as saving 30-40% on establishment costs.

“Traditionally sugar beet is one of the first fields on the farm to be ploughed. So we really need to be there in September or early October.

“But if it gets too wet you have to pick your timings. It has to be one of the most important jobs to get done and if we do get into a wet period, you have a smaller working period in the autumn.”

Growers also need to be mindful of restricting traffic at harvest in the previous crop to prevent compaction, he says. And by using the existing wheelings, strip tillage provides one season controlled traffic farming.

With interest in strip tillage increasing, Mr Priestley is keen to look at using the Stripcat in cover crops and try the system out for maize and brassica vegetable establishment.

But ultimately he looks forward to trying the system in wheat to see if he can replicate the success with blackgrass control.