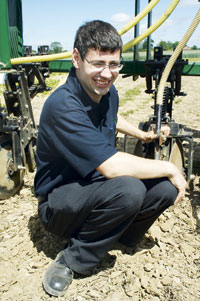 A new HGCA project has begun to look at the potential of strip-tillage establishment of oilseed rape crops with the aim of investigating the potential of using glyphosate to control weeds between the rows, Nathan Morris of NIAB TAG said.

“With the concern over some of the residual herbicides in water, we’re looking at other methods of weed control.”

The strip tillage system cultivates strips 50cm apart to a 4-8in depth with the seed being placed in the bands via spouts from a hopper mounted on the cultivator. Wide-spaced rows had the advantage of allowing the canopy to branch out and let more light into the crop, helping fill out pods lower in the canopy structure, he said.

It also allowed growers to potentially use glyphosate to control weeds between the rows.

“So we’re looking at a range of nozzles, hooded application and using GPS-guidance systems to drive accuracy.

“If it works there is no reason why we couldn’t consider other crops, such as sugar beet, for a similar system.”

Previous trials in sugar beet had found strip-tillage could offer an alternative establishment method to the plough for growers, particularly on light land. While yields were 4-10t/ha lower across the two years of trials, the savings in passes establishing the crop meant margins were similar.

It could also help growers avoid the use of cover crops and reduce soil erosion and wind blow, as well as reduce costs, he suggested.

But it would need some refinement for it to be used more widely, Dr Morris admitted. “It really needs yields to be comparable.”

Part of the yield loss came from uneven plant populations resulting from drilling in poorer seed-beds, he said.

Modifications, such as the use of a spring-tine or crumbler roller ahead of the drill could help, he reckoned, as well as a look at different drills.

Precision drills were designed to work on a level seed-bed, which wasn’t always possible with non-inversion tillage, he explained. “But there are drills on the continent that use a double-disc opener, which work better in trash conditions.”