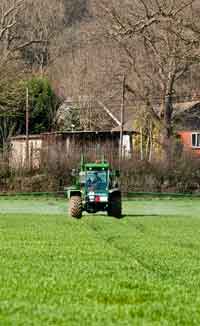 Strobilurin fungicides could play an important role in helping milling wheat growers achieve protein specifications this season, according to Peter Gould, a UAP agronomist, based in the south of England.

Meeting the grain protein target of 13% could be a challenge for some growers of high yielding milling wheat crops this season, he believes, with low soil mineral nitrogen levels meaning crops will need more feeding to achieve both yield and quality targets.

Meeting those targets could put growers in danger of exceeding N Max limits, he warns.

For example, at Peter Rose’s La Lee Farm in Winterborne Whitechurch in Dorset, soil mineral nitrogen tests have indicated levels in the soil of only 30kgN/ha down to a 90cm depth.

Using UAP’s nitrogen calculator (see panel), that crop is likely to need around 350kg/ha of applied N to reach the 10t/ha yield and 13% grain protein target, well above the 300kg/ha of N Max limit for a crop with those targets.

“Even putting in a target protein of 12.5% comes up with a total applied N of 320kg/ha of N, so it looks like we could be in trouble [to meet the specification] unless we can extract every last drop of N.”

“Strobilurins allow you to extract all of the [measured] soil mineral N and hopefully a bit more.”

Soil cores taken from the pyraclostrobin-treated plots taken after harvest suggest that is the case, he says. “Typically they have 15-20kg/ha less N than the triazole programme, suggesting the crop has been able to extract more N.”

The effect appears to be down to the fungicide stimulating the plant to scavenge better for N, he says. “Research has found it stimulates an enzyme in the root that helps the plant take up N more effectively.”

To get the benefit, pyraclostrobin has to be applied at T1 and T2, he stresses. “We’ve looked at other strobilurins, and trifloxystrobin appears to have the same effect, but it is weaker in disease control.

“Typically we’re using a half rate of Comet at T1 and a half rate of Jenton at T2, in mix with a triazole fungicide. We find the fenpropimorph in Jenton gives better septoria control, possibly by improving uptake of the triazole.”

The use of strobilurins might increase the fungicide spend to £120/ha, Mr Rose notes. “But if you want to get quality out, you need to put quality in at the start.”

Last season’s results increased his confidence. Yields improved over the previous year by over 0.5t/ha, but as importantly, proteins also increased from around 12% to 13%. “The figures prove the theory. Upping the fertiliser and using strobilurins helped get both yield and quality.”

It might take more to reach that quality this year, Mr Gould admits. “I will be pleasantly surprised if we get 13%; I think it might be more like 12.5%.”

But two other factors could help boost grain proteins, he hopes. “Nothing has come out of the N cycle because it has been so cold, so we’re hoping there is still some to come out of the system. We also don’t know what contribution we will get from the sewage compost applied two years previously before oilseed rape.”

Sulphur will be added to two applications of N, after a trial on the farm suggested potential benefits. “It is also something we are looking at in trials,” Mr Gould says.

Longer term, the plan is to increase organic matter in the soil. Soils with 6% organic matter mineralise around 40kg/ha of nitrogen, and fields with higher organic matter typically have higher soil mineral nitrogen levels this spring, which could increase the chances of reaching target protein levels, Mr Gould says.

“That is where the future lies – it gives you some freely available N and improves yield stability.”

To begin building up his organic matter Mr Rose now chops all his straw and switched to non-inversion establishment, except for rotationally-ploughing some land ahead of spring barley. The application of sewage compost will also help.

But it is a long-term strategy, Mr Gould stresses. “It will be 15-20 years before you see significant improvements.”