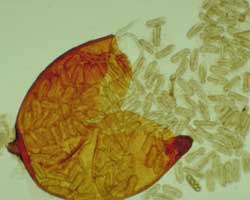 With its higher sugar content, the beet cyst nematode-tolerant Fiorenza lifted adjusted tonnes by 44%, worth an extra £750/ha, notes farm manager and trial host Colin Holman. Having grown beet for 40 years, the past 10 on fenland soils, which have become increasingly lower-yielding with every beet crop grown, Mr Holman is no stranger to BCN damage.

He looks after 1350ha of arable crops for Agreserves growing about 260ha of sugar beet on a mix of fen and lightland soils. “We know exactly where to expect damage, and some seasons see 75% yield loss in the infected patches,” he says.


“Unfortunately, the pest appears to be spreading from fen to sandy soils, and in bad years the plants simply stop growing at the four to six-leaf stage and rarely recover. It’s pretty dramatic. Roots take on a similar appearance to those infected by rhizomania, and you can clearly see BCN cysts on lateral roots.”

The resulting beet, being much smaller, are harder to harvest and have higher tare levels.

While Fiorenza wasn’t immune – a small number of cysts were obvious – the yield response compared with the conventional type in a not particularly difficult season was “pretty remarkable”, he says.

Because of the pest, and to accommodate a wide range of field vegetable and salad crops, Agreserves grows beet on a quite wide rotation, only once in six years. The key to success has been devising an establishment approach to prevent wind-blow and seed loss.

Blowing tends to be worse on BCN-infected land, because the pest doesn’t allow the crop to set roots, so it’s necessary to maintain the cereal guard crop for longer than normal, notes Mr Homan.

In recent years he has brought forward drilling to try to drive yields up. He now starts around 20 March and finishes before the end of the month. Previously, he would not normally have considered sowing before April.

He usually relies on experience to tell him where beet sickness is likely to be a problem. But tests on the farm last November highlighted the extent of the threat.

They showed counts of 1000-6000 eggs and larvae per 100g of soil from four fields, all of which are clearly badly infected, being well above the 50-500 threshold accepted in Continental Europe.


The Fiorenza was drilled across the field in four blocks of eight rows, adjoined by 16 row strips of a conventional variety.

“You could see to a line the different blocks and the effects were very obvious,” says Mr Holman. “The conventional variety was not as dark green as the Fiorenza and produced smaller leaves and smaller beet.”

BCN remains dormant in the soil in pinhead-sized cysts, each of which contains up to 300 eggs and larvae.

When beet is next grown in the rotation, root secretions from the plant activate the nematodes, which leave the cyst and penetrate the root. Here they develop into adults.

The females swell and break out of the root, but remain attached to the root cells. The free-living males in the soil then mate with the females, which produce 250-300 eggs before dying and falling off the root.

As the female dies, its lemon-coloured body changes from white to a strong-walled brown-coloured cyst. This can survive, with its eggs remaining viable, for 10 years.

In central European conditions, up to four generations of the nematode can develop every year.