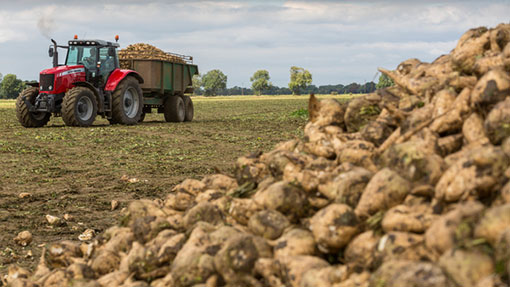 Prospects for this year’s sugar beet harvest are good, but hefty global sugar supplies are hitting financial returns, the NFU has said.

The 2014-15 sugar beet harvesting campaign had got off to a “terrific start” and factories were running “very well”, according to NFU sugar board chairman William Martin.

But although prospects remained “very good” for the 2014 crop, with growers recording high yields, Mr Martin warned that next year could be more challenging.

He said there was much talk about supply and oversupply of crops affecting prices for many crops at the moment.

“Sugar is not immune from this. We are facing enormous, unprecedented levels of global sugar stocks,” Mr Martyn told NFU Council this week.

Global stocks of sugar represented more than 35% of annual consumption. And he said there were “huge sugar stocks in the EU and the UK”.

“In the UK, we are reducing our area of sugar beet by 20% to try to have some effect on the overall level of stocks.”

As a result of this global oversupply, British Sugar has offered beet growers a lower price for 2015-16 of £24/t.

Therefore growers who “didn’t fancy growing sugar beet next year” who found this lower price was unattractive were offered the chance to opt out for a year, Mr Martin said.

“We [the NFU and British Sugar] spent a long time discussing how we were going to do it. We don’t think there was a better way.”

The sugar industry used to have a system in Europe that protected us from volatility – both in terms of volume and price.

But Mr Martyn said policymakers decided they didn’t like it and wanted to expose growers to free markets and volatility.

“They’ve got what they asked for,” he added. “At the moment, we are bearing the brunt of it.

“Two years ago, in the food price spike, consumers were bearing the brunt of it. They didn’t like it then, we don’t like it now,” Mr Martyn said.

“Unfortunately, it is what our policymakers have signed up to on our behalf.”

He said the NFU’s role was to try to find ways to help beet growers mitigate this price volatility, adding: “It is not possible to remove that [volatility] entirely.”