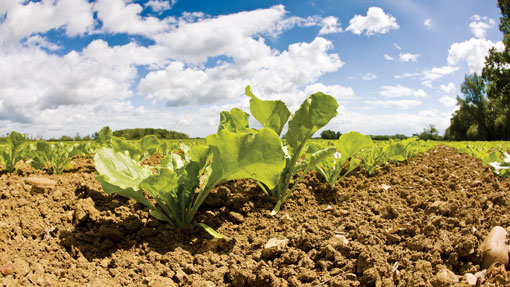 The 2013 sugar beet emergence problems have resulted in new measures to improve seed traceability to aid scientific research in the future.

Those measures include increasing the information on seed boxes and educating growers on what they need to record and retain.

These will include all samples, varieties and their treatments at two different drilling dates – early and late. NFU chief sugar adviser Ruth Digby says growers and the BBRO had requested these measures were put in place before the new season.

“There was not enough sample retention in the seed processing and supply chain and when the investigation began after the problems came to light, it really hampered the process,” explains Miss Digby.

“Growers will receive guidance ahead of the new season on what the information on seed boxes means and which bits of information they need to record for future reference.”

Reports of poor emergence and erratic growth symptoms in beet crops were first reported in late April and were largely confined to seed lots drilled between 20 March and 8 April. Those symptoms included low establishment – 30,000-60,000 plants per hectare, instead of the target of around 100,000 – poor vigour, twisted hypocotyls (seedling shoots) and radicals (seedling roots).

Abnormal root shapes and so-called “fanging” symptoms were also observed in some crops as they matured later in the summer, but were not always in fields affected by earlier emergence issues.

A number of grower complaints over poor emergence seemed to be focused around the Bury St Edmunds area and although initially confined to one variety, later appeared across a wider number from various seed houses.

Mark Stevens, BBRO’s lead scientist, has been coordinating the investigation into the problems, which has included commissioning tests out to independent bodies both home and abroad.

“There have been times where we believed we had observed a pattern to potentially understand the problem, only to find a further run of samples that contradict that view,” says Dr Stevens.

Seed processor Germains, who prime, pellet and coat all raw seed in the UK were also implicated, as their new X-Beet Plus pellet was introduced on 100% of UK seed for the first time for 2013.

Both have since been cleared of any sole responsibility, with the general conclusion of the report blaming interactions with the extended period of cold temperatures to which the seed was exposed.

Dr Stevens points out that currently the EU standard germination tests required for certification are currently only carried out at 20C.

“It would be ideal if the standard testing could also accommodate stressed conditions, such as cold, but the process would take up to 50 days, rather than two weeks.

“It would be costly and may have a huge impact on the supply chain and seed delivery. It would be difficult to turn into commercial reality,” he adds.

Miss Digby says that the problems have served to highlight the need for a review across Europe on whether the standards in the sugar beet seed chain are fit for purpose.

“There have also been calls from growers to reassess the seed processing agreement to offer more choice.

“We are constantly looking at this issue, but Germains are providing a good quality and cost-effective service at present,” says Miss Digby.

NFU sugar board member Robert Baker, who grows 160ha of sugar beet 10 miles east of Bury St Edmunds at Drinkstone, says the ability to review these processes has been the only win from the saga.

He is frustrated that a single cause could not be identified in what is a very complex seed supply system and the problems have been papered over by many crops with low plant populations recovering to return better-than-expected yields.

“There has to be some element of responsibility for the breeders and processors involved, with the same variety from seed box A and box B performing very differently in some cases.

“There should have been room for a goodwill gesture to some of those growers that have lost out financially,” says Mr Baker.

Seed processor Germains told Crops they have always maintained robust and strict quality assessments on all their UK seed.

However, their global sugar beet director Gerard Mulqueen says as a result of the problems experienced by growers in 2013, they will be retaining further samples to assist in the event of future problems.

Breeder SES Vanderhave UK’s general manager Ian Munnery says he is also making changes internally, stepping up trials of their varieties on a number of sites to reassure growers that they have the relevant data going forward. “It will enable us to scrutinise our varieties much more closely across a range of varieties and conditions,” he adds.

Despite the problems, British Sugar’s Paul Bee says the national crop has recovered well from its difficult start, with only 2% of the area re-drilled and some of that attributed to strong winds in May.

The BBRO has not changed its drilling guidance, despite the problems, and providing soil conditions are suitable and no cold spells are forecast, drilling should begin as soon as possible after 1 March to maximise yield potential.