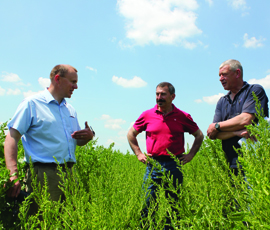 One leading sugar beet seed breeder has sought to allay fears about the quality of its seed after poor establishment in eastern England this spring.

SES VanderHave’s early-sown variety Cayman was heavily criticised when emergence and early vigour problems caused growers to point the finger in its direction.

However, it quickly emerged that there were also problems with varieties from other seed houses and an ongoing investigation by the British Beet Research Organisation (BBRO) aims to find the root cause.

The Belgian-Dutch company was keen to show the vigorous processes that seed has to go through before making it into beet drills on a recent press tour to Italy.

The breeder’s UK general manager Ian Munnery told Farmers Weekly that the group is proud to have five of the six top yielding varieties with low bolting scores.

“We supply varieties specific to the UK market and all the seed produced here in Italy and southern France goes through vigorous testing at our laboratories in Tienen [Belgium],” Mr Munnery says.

Sugar beet seed production in Italy is largely situated in the Emilia Romagna region, around and to the East of Bologna, on the fertile soils of the Po valley,

The group has around 1,400ha of seed crops in the area, which has a beneficial climate and good soils and also a professional grower base to produce top quality seed.

Lighter soils in the Po delta are home to “steckling” production; with basic sugar beet seed planted and over wintered under fleece to ensure the plant vernalises.

It is then harvested and transplanted into the heavier soils further south through February and March, where the plants flower and seed for a July-August harvest.

“A gentlemen’s agreement also exists between us and other breeders operating in the area, with buffer zones implemented between seed crops where necessary,” he says.

Every seed lot is cleaned, sampled and sent to Belgium for around 10 weeks of testing for genetic purity, germination, disease and bolting scores in controlled glasshouse conditions.

“We have extremely high standards and if there are any problems with a seed lot, it will be identified and discarded immediately,” says Mr Munnery.

From a seed yield of around 4-5t/ha, only 25% will make the grade and the raw seed is then passed to Germains for priming, pelleting and coating.

“The UK is the only country in the world where we have to hand our seed over to a third party for the final process prior to delivery on farm,” he adds.

Mr Munnery believes it demonstrates the need for traceability and transparency in the seed supply chain, with his group confident that its seed was in good condition before the pelleting process.

“Growers and contractors need to get better at recording what seed was planted and where, including field, treatment, trait, bulk number, variety and box number, so we can better monitor future performance,” he says.