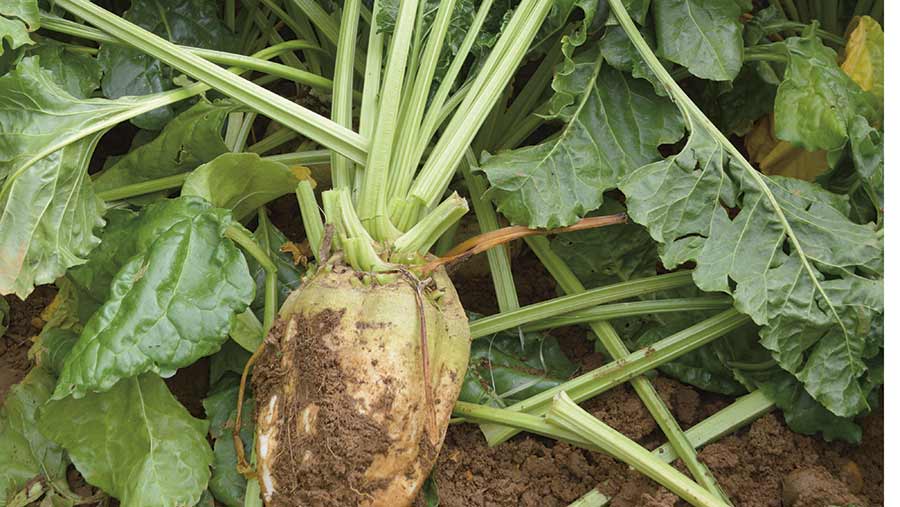 First-time sugar beet grower Alex Jasinski turned to the root crop to give him an extra non-cereal break on a block of newly rented land that fits into his min-till regime.

He is one of the 140 newcomers to sugar beet this season, who have helped boost the national crop area by a third after he sought a profitable break crop on this land in south Lincolnshire.

Sugar beet looked his best option as spring beans performed poorly on the farm, while he already grows a sizeable area of oilseed rape as a seed crop.

His rich loam soils just east of Grantham are well suited to sugar beet as he looked to spread the cropping risk on his farm, which already grows winter wheat, rapeseed, spring beans, triticale and vining peas.

“We would hope sugar beet on this land would match the profitability of oilseed rape, and it would certainly be ahead of spring beans,” he told Farmers Weekly.

Mr Jasinski took on the extra 188ha of land on a short-term tenancy to add to the 212ha his family runs at Little Scotland Farm, Ingoldsby, some six miles south-east of Grantham.

He did not want to take on more than his current 44ha of vining peas grown for seed as harvest can be tricky, and he had his hands full with growing oilseed rape and fodder rape for seed.

Spring beans had yielded only 3t/ha over the past two years, and he had vowed not to grow the crop again.

So he plumbed for a 2,600t sugar beet contract with the British Sugar factory at Newark, some 26 miles away, and 37ha of sugar beet on the new 188ha block of land would give him a one in five-year beet rotation.

“The main reason for the extra crop is to spread the risk over a number of crops and sugar beet looked the best option,” he added.

As a new grower, he was urged to be cautious and aim for a modest yield of 70t/ha – although national average beet yields are about 75t/ha – so he ploughed the land and a contractor drilled 37ha of the crop in spring 2017.

Tim Whitaker, agronomist with advisory group Frontier, was more optimistic for the crop as it had thrived along with many other sugar beet crops in a wet summer.

“We hope the crop will exceed 70t/ha and will be looking for 85t/ha given the leaf canopy and regular rainfall this summer,” he said.

Indeed, he sees sugar beet as a marginal crop at 70t/ha and said it needs to yield towards the higher figure to start to get a decent return when harvesting starts on the farm in mid-November.

With an estimate of variable costs, together with contract drilling and harvesting, moving close towards £1,000/ha, then growers need a good year with beet prices at £22/t before any bonuses.

Mr Jasinski said sugar beet is the most expensive crop on the farm to grow, especially as he is looking to control grassweeds.

“Blackgrass is not a problem, but it is there and is another reason to choose a spring crop to give more time to control the weed,” he added.

Next spring, Mr Jasinski expects to trim his area to meet his contracted tonnage and also may try min-till shallow cultivations ahead of drilling next spring as he has been strip-tilling cereals for the past eight years.

“This has made a huge difference, especially on the stronger ground. The soil structure is better with more earthworms and the land is more workable,” he said.

Mr Jasinski is keen to keep a 50-75mm surface layer of good rich soil he has achieved with strip-till, so is aiming the try out min-till ahead of his sugar beet crop next spring.

Sugar beet crop on the rise

The UK sugar beet crop area this season is up by one-third to some 107,000ha, encouraged by higher beet prices and the ending of EU quotas at the start of October 2017.

Beet processor British Sugar is expecting a sugar crop in excess of 1.4m tonnes this year, sharply up from last season and close to the record yield of 1.45m tonnes harvested from the 2014 crop.