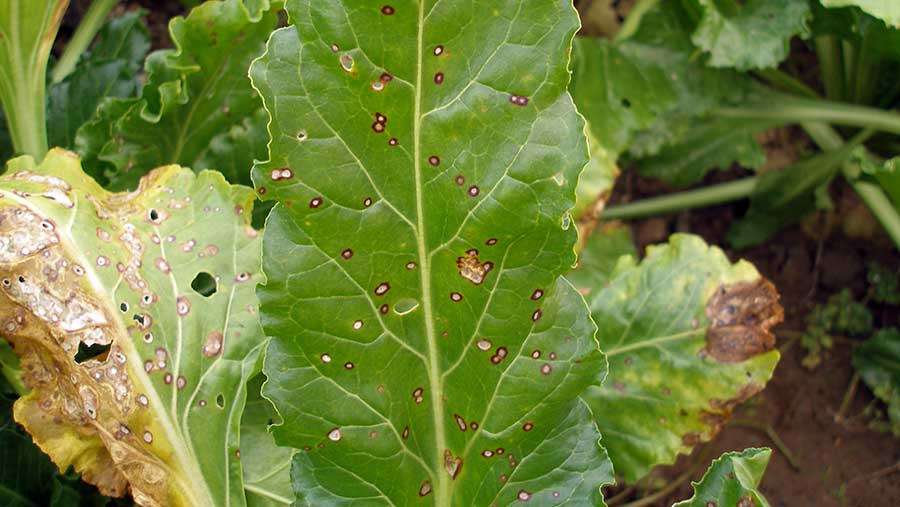 Resistance to one of the key fungicide groups used to control cercospora leaf spot in sugar beet disease has been discovered in the UK for the first time.

Testing of infected samples taken from crops in Cornwall, Suffolk and Lincolnshire has confirmed disease resistance to all strobilurin fungicide chemistry.

Cercospora is a minor foliar disease of sugar beet that is rarely seen in the UK. It can show up in damp, humid conditions and can lead to high yield losses.

See also: How to achieve success with malting barley on heavy land

The British Beet Research Organisation’s (BBRO) lead scientist, Mark Stevens, says the discovery is concerning, but stresses that it needs to be viewed in context.

“These were three samples, taken in one year and collected as part of a large-scale European monitoring programme, and does not mean there has been an escalation in the threat level posed.”

Dr Stevens adds that while cercospora can be a serious disease and is widespread across Europe, it is not the principal disease threat to crop performance in the UK or the primary target of fungicide programmes.

He says that further work is needed to determine the scale and significance of the resistance.

The fungus appears on leaves as small, grey circular lesions with a reddish-brown margin and is spread by wind and rain-splash.

It usually occurs infrequently and at low levels in the UK as cooler weather is not conducive to its development.

The disease can be sometimes be found in crops later in the season when it has less impact on yields.

Bayer’s root crop campaign manager, Edward Hagues, says that one of the main purposes of fungicide co-formulation is to help manage disease resistance.

“Azole fungicides are unaffected by this resistance and will continue to provide protection against the disease.”