Sugar beet growers are being urged to focus on cutting harvesting losses this season with the beet area up and a bumper crop in prospect.

Growers should be aware of differences between varieties when it comes to optimum harvesting date, say experts from the British Beet Research Organisation (BBRO)

“Knowing whether to lift it now or later really matters in such a high-yielding season.

“The factories are set to remain open until March and crops could put on another 30-40% yield if they are left in the field until December,” says Simon Bowen of the BBRO. 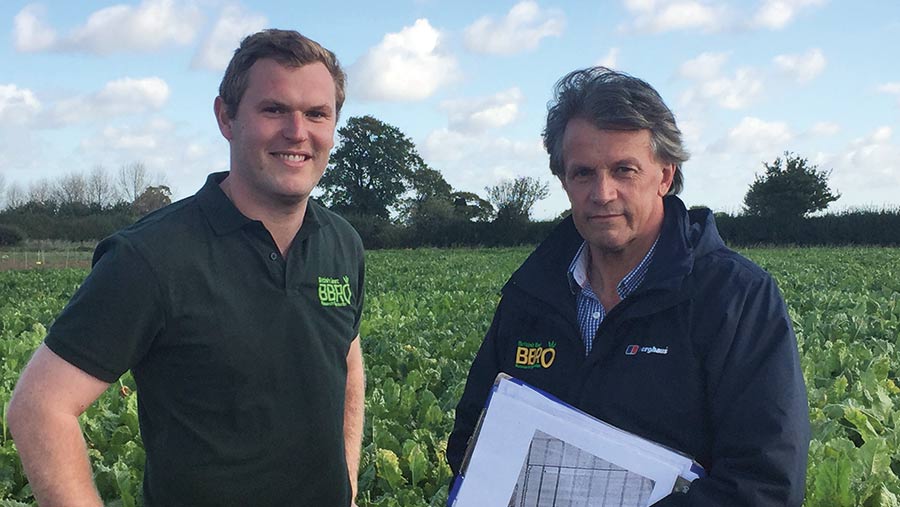 Varietal differences are being looked at by the group’s network of six demonstration farms, with digs in selected varieties taking place early, mid and late in the harvesting campaign.

“Some varieties will yield more than others in a late harvest, so we are looking into this with our host farmers.

“Once we have that information, it will allow growers to be more tactical with their variety choices,” he says.

Varieties in the Recommended List testing system are all lifted in October, so there is a gap in knowledge.

An upright green canopy, with a vigorous top and signs of active growth in early October is a good sign in a crop destined for later harvesting.

“In order to intercept light for root growth, the canopy has to be effective. So where there are indications of senescence, which affects the lower leaves first, the variety is nearly ready for lifting. Some develop faster than others,” he says.

Harvesting practices are being monitored by BBRO’s harvester testing programme, and surface losses behind the harvester are running at 0.5t/ha so far this year, reports Stephen Aldis, the group’s mechanisation expert.

“Where there are higher numbers of small roots, these losses can go up, just as they can in very wet conditions,” he says.

With whole beet delivery, growers and contractors should be removing the minimum of crown material as possible, aiming for a crown scar of 3cm. 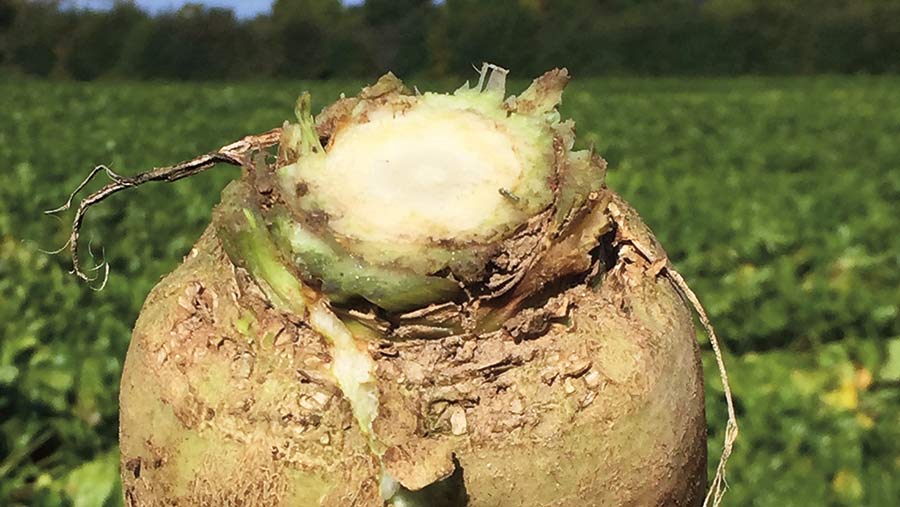 “A good guideline is to work towards a scar the size of a £2 coin. Going as far as 8cm in scar size could result in a 10% yield loss,” he adds.

Green material left behind at crowning is a potential issue, and root tip breakages from the harvesting operation should also be assessed, as losses can escalate.

“If the diameter of the breakage point is less than 2cm, then you’re doing well. But if it’s as much as 4cm, the losses will be much higher,” he says.

Last year’s average yield loss at harvesting was 2.6t/ha, with most of this coming from root breakage rather than surface losses.

“Aggressive lifting might result in a 9t/ha loss, compared to 3t/ha with gentle lifting,” he says.

The sugar beet harvest has only just started at Morley Farms in Norfolk, one of the British Beet Research Organisation’s six demonstration farms, with a rolling average yield of 83t/ha, farm manager David Jones is hoping for a good year and has seen production rise steadily across his 110ha of sugar beet.

“We have a longer, more sustainable rotation now. The area of beet grown here has remained constant, but we are producing more beet per hectare than we used to,” he says.

Local crop research allows him to see what the results of various techniques are likely to be on his soil type and on a field scale.

This two-way exchange between researchers and growers is invaluable, as is having 24 different sugar beet varieties growing on the farm.

“Sugar beet varieties come and go very quickly, but most growers are looking for reliability. Working with BBRO means we have started to identify the best for this all-important characteristic,” he says.

A new British Beet Research Organisation research project is looking at the pros and cons of using a chaser bin harvesting system comparing this with a conventional harvest system and look at their use across a range of soil types, harvest dates and seasonal conditions, as well as any effects on adjusted sugar content and greater soil movement.