Nigel Roper is British Sugar’s only grower west of the M5 motorway. When the last West Midlands sugar beet plant closed nearly a decade ago he stayed with the crop and this year his beet area is up nearly 20%.

Tucked into the far south of Herefordshire close to the Welsh border, he now sees local anaerobic digestion (AD) plants giving him a growing market for his beet as the British Sugar price has soured. 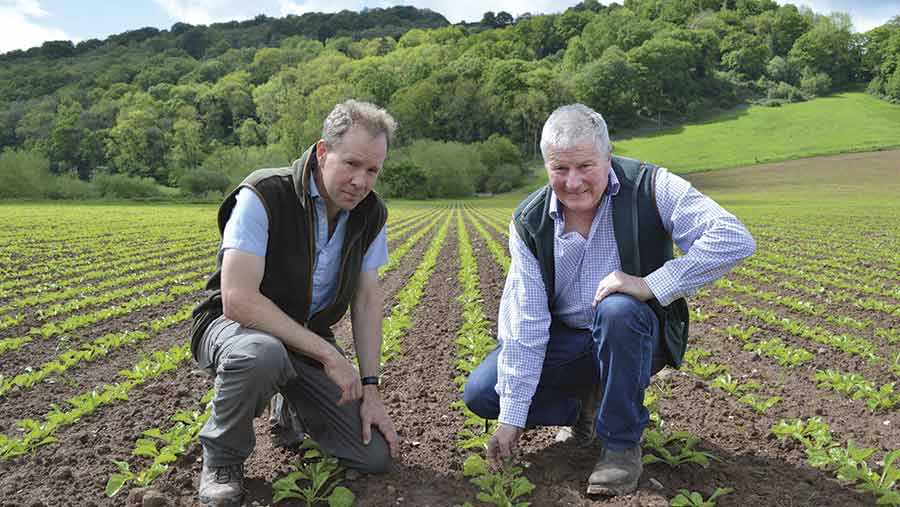 When the last beet plant in the West at Allscott in Shropshire pulled the plug on processing in 2007, Mr Roper decided to haul his beet 141 miles to Newark in Nottinghamshire, which only made sense as he own his own trucks and they always have a return load.

“The main reason for staying with sugar beet was that we had just re-equipped with machinery for growing the crop, and back then it was the most profitable crop on the farm,” he tells Farmers Weekly.

Beet yields average an impressive 95t/ha helped by the longer wetter growing season than in the drier eastern beet heartland, and the crop is a very useful break from cereals as potatoes and grassland have declined in the area.

At the height of the harvesting season, Mr Roper is shifting over 100t of beet a week and can be lifting beet eight-and-a-half months of the year to supply British Sugar, digester plants and livestock farmers.

The sharp fall in British Sugar’s beet price with the world awash with sugar down to £20.30/t makes the crop borderline in terms of profits, and the digester trade is offering a sweeter price.

When Allscott closed its gates for the last time, Mr Roper sent 90% of his beet to British Sugar; now it is down to about 60%, with 30% going to local digesters and 10% for stock feed.

“If the price doesn’t improve from British Sugar, we will need to look to supply more to the digester plants,” he says.

Mr Roper has pushed his beet area up to 245ha this season from 202ha previously on his 810ha of mainly arable land he owns and rents wrapped around the winding River Wye.

He is even growing 40ha of beet across the border in Wales, which is likely to be the highest grown at 700ft above sea-level, on sloping fields tumbling down towards the river near Monmouth.

Most of his land is easily worked sandy loams around his base at Flanesford Priory in Goodrich, three miles south of Ross-on-Wye, where sugar beet is grown in a rotation, which includes winter wheat and seed crops of vining peas, stubble turnips and herbage.

Mr Roper can shift four 29t truck loads a day of beet for seven days a week in the harvest season to fulfil his 12,000t quota to Newark, which is nearly twice as far as the old 75 miles journey to Allscott.

His fleet of four trucks bring back beet pulp, LimeX and also top soil for turf growers back to his native Herefordshire to make the journey pay.

One advantage of growing sugar beet is that the crop continued to grow up to harvest day leaves the soil drier than after potatoes or maize, and so gives excellent soil conditions to drill winter wheat.

“We can drill wheat straight behind the beet harvester, while soils are often wet and in a poor condition after maize,” he says.

This season, a lot of his beet was drilled in March, with his crop on higher land in Wales drilled in April, but in a truly round-the-year operation he finished drilling this spring ahead of lifting the last of his late beet.

David Allison, agronomist and sugar beet expert with advisory group Frontier, believes sugar beet has a promising future in the West with the growth of the digester market.

“Sugar beet is a growth area over here, and if you want to keep sugar beet in the rotation or expand then AD plants look very attractive,” he says.

Mr Allison adds that the main difference in agronomy is that there is a greater need to protect against rust disease later in the season with up to three fungicide sprays used for late-lifted beet, but the higher yields in the warmer and wetter climate more than compensate.

He points out that beet puts on 30% of its weight from the beginning of September so the wet mild autumn and lack of frost helps to keep crops growing longer.

The digester plants use sugar beet, maize and forage rye but often prefer beet and want a supply for 12 months of the year, so he is looking at ways to achieving an all the year supply.

One idea is to direct drill beet in June to conserve moisture and then harvest the crop the following April and May so trying to bridge the gap until new crop comes on board in September. Furthermore, after the beet is lifted there would still be time for a crop of maize or potatoes, he says.

He looks after 800ha of the crop in Herefordshire and Worcestershire, but estimates that there could be about 4,000ha of the crop grown in the West Midlands, including further north into Shropshire.

Mr Allison argues that beet is often a better bet than maize as it can limit soil erosion at harvest, and the rapid expansion of maize has led to severe soil erosion problems in Herefordshire.

Mr Roper’s initial reasons for continuing with beet after Allscott’s closure in 2007 were that he had recently invested in a new drill and harvester, had trucks to use and also had a skilled workforce which knew how to grow beet.

He became confident enough of the crop’s future to update his harvester with a second-hand six-row machine some two years ago.

The only cloud on the horizon is the end of sugar beet quotas in 2017 and what that will mean for sugar beet prices from British Sugar.