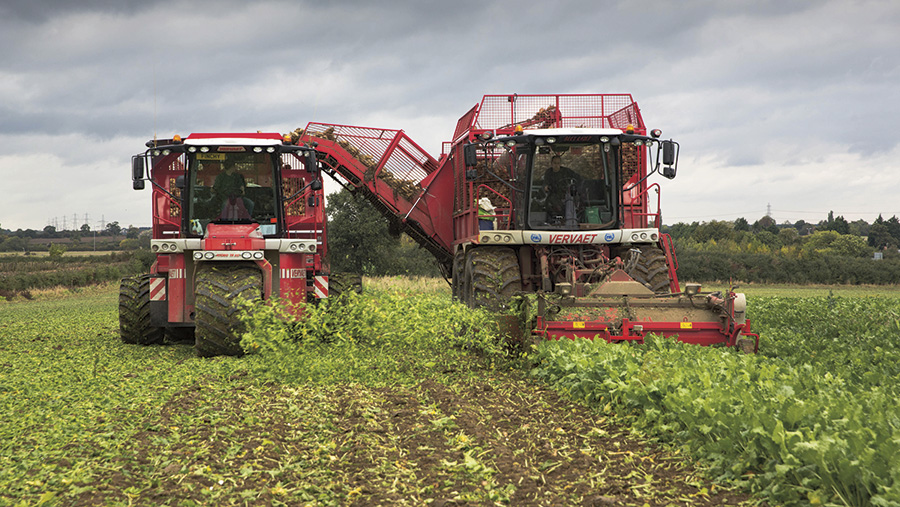 Arable growers are being tempted to try sugar beet – even if they have never grow it before – as beet quotas are being abolished and the world sugar price rises.

Beet processor British Sugar is preparing for an open-market future by increasing beet prices, and offering flexible contracts to make the spring-sown crop an attractive option.

The existing 3,000-plus beet growers are being offered either one- or three-year contracts, while one-year contracts are available for new growers and returning growers.

The company is offering a guaranteed minimum price of £22/t for the 2017 crop, up 8.4% on the previous season, with bonuses depending on the price of sugar.

Colm McKay, the group’s agriculture director, says the industry is well-placed to take advantage of favourable markets and so growers can be confident of achieving more than £22/t.

“No one can predict what the marketplace is likely to be in 2017, but with the bonus mechanism that we’ve introduced, our contracts could deliver beet prices in the region of £23.50/t on the one-year contract and £26/t on the three-year contract,” he says.

What’s on offer to new growers?

One year contract – beet price of £22/t guaranteed minimum, plus a sugar revenue market bonus of 10%.

New growers will be restricted to the one-year contract, which comes with a minimum price of £22/t plus 10% of the sugar revenue paid as a market bonus, triggered when the sugar price is above €475/t until it reaches a €700/t limit.

In addition, the limit that growers can receive the transport allowance has been increased from 50 to 60 miles of one of the four beet factories – Wissington and Cantley in Norfolk, Bury St Edmunds in Suffolk and Newark in Nottinghamshire.

Farmers can grow beyond 60 miles, but the allowance they would receive is fixed at 60 miles.

“We’ve been very pleased with the response we’ve had so far, but there is still a chance for more growers to get involved,” he adds.

Area managers can give support with growing, harvesting and delivery, and contractors can be used for specialist tasks, while it’s a crop where yields have risen steadily.

“They’ve gone up by 25% in the past 10 years and there’s nothing to suggest that they won’t continue to rise,” he says.

Jo Franklin will be growing sugar beet for the first time at Lower Heath Farming, near Royston, Hertfordshire in 2017, as she re-considers her break crop options and their profitability.

The AHDB monitor farmer is disillusioned with oilseed rape and this is one of the main factors behind her decision to go with sugar beet.

“Although we didn’t have to pull any of our oilseed rape up last year, we only managed an average yield of 2t/ha, due to the massive cabbage stem flea beetle problem in this area,” she says.

“We can’t afford to do that again. So for the first time in 12 years, we haven’t put any rapeseed in the ground here,” she adds.

That made for one of the easiest, stress-free Septembers she can recall, with associated benefits on the farm’s cashflow and autumn workload.

“We will be growing peas, and trying some spring rapeseed, as well as increasing our winter barley and winter oats areas. But 40.5ha will be going into sugar beet,” she says.

Sugar beet stacks up better than any of the alternative crops, and will be grown on relatively heavy land so it will have to be lifted early.

“It’s the most attractive spring crop option at the moment. And the way that the market is going and the contract is structured, there’s every chance that we will get more than the minimum £22/t price for it,” she adds.

Contractors will be used to drill and lift the beet, but will do everything else with the existing farm workforce and equipment.

“Sugar beet is a new, but exciting, opportunity for us, which has come at just the right time,” she says.

Michael Jones of Mautby Hall Farm is keen to keep sugar beet in his rotation, despite a lack of experience with the crop as he has only just taken on the council farm near Great Yarmouth last year.

After looking at how sugar beet has performed on the farm in previous years and compared it with alternative break crops, he has just agreed to a one-year contract for 2017 and will be sending about 950t of beet to the Cantley factory.

“Having the extra crop option is important.

“It allows us to keep a very diverse rotation, meet the three-crop rule and hopefully avoid some of the weed and pest resistance problems that are developing in tighter crop rotations,” he says.

Mr Jones considers sugar beet to be a good break crop, adding it has traditionally been grown in Norfolk for a reason.

“It seems to work well in a mixed-farming system and it’s also more weatherproof than other crops, so it reduces risk.

“I’m not a fan of oilseed rape, for that reason, so it wasn’t in contention for the new farm,” he adds.

The minimum price for sugar beet was also a factor in his decision as it brings some certainty at an uncertain time.

Farm business consultant Rob Wilkinson of Strutt & Parker’s Stamford office has several farmer clients who will be making room for sugar beet in 2017.

The common factor is the latest margin figures for growing sugar beet make it more attractive than the alternatives, with the new contracts also offering market-linked bonus payments.

He points out that one of the farms in question hasn’t grown oilseed rape for the past four years, and is in no hurry to go back to it.

“Wheat yields have increased, blackgrass control has been better and slug pellet use hasn’t been necessary since we stopped growing oilseed rape there,” he says.

Putting sugar beet in allows us to extend the rotation, without sacrificing the first-wheat slot or having to go back to a crop with some hefty agronomic challenges.

“In a dry spring, pulse crops can be very difficult to establish, with yields being affected disastrously.

“Sugar beet is more robust and it has longer in the ground to make up any yield shortfall that comes from a dry start,” he says.

However, an early lifting slot is important in these situations and will be key for other first-time growers as it’s important to be able to get a first wheat established behind sugar beet.