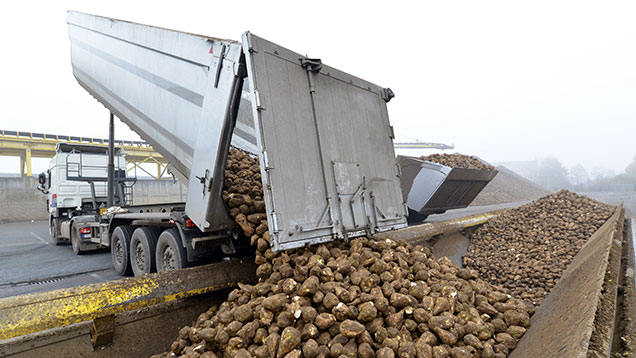 Sugar prices are likely to remain low for the time being – despite the efforts of farmers who have reduced the area of beet grown.

The downward trend in European Union sugar prices appears to be slowing down or perhaps even bottoming out, say Rabobank analysts.

But global sugar prices will continue to remain under pressure and are only likely to stage a substantial recovery if there are subsequent deficits expected post-2015-16, it warns.

The update comes days after British Sugar announced a 15% drop in the price it will pay UK growers for the 2016-17 sugar beet crop.

Farmers supplying the processor with beet will receive £20.30/t for their contract tonnage – down from £24/t they will be paid for the crop in the ground now.

Total EU sugar production for the 2014-15 season is estimated at 19.3m tonnes raw value, according to a Rabobank update on Friday (3 July).

This is 13% higher than the 2013-14 season and EU stocks are significant, with volumes above the five-year average.

“The downward trend – which the sugar price in the bloc has been witnessing since mid-2013 – seems to be slowing down or possibly bottoming out,” says the Rabobank update.

“So far, current growing season is ahead of the five-year average, but below last year’s level.”

UK growers have reduced their contracted tonnage by about 20% for the current year.

But EU Mars Crop monitoring forecasts suggest an overall increase of 3.3% in beet yields compared to the five-year average, while the year-on-year change is down 5.9%.

But until harvesting begins, the season is still full of uncertainties, and the update says final beet and sugar yields could still be “seriously influenced by weather anomalies”.

Globally, the market has been trending downwards on the back of the persistent abundance of stocks, aggravated by a strong seasonal mismatch between export availability and import demand.

“There is no indication at the moment of how low sugar prices can go in the absence of any supportive developments,” says Rabobank.

“The market might be paying for the cost of carry, but at some point in time, producers can no longer kick the can down the road and will eventually be forced to sell any accumulated stocks.”

With production for 2015-16 exceeding expectations, Rabobank says it will not be easy for producers to accept that prices could fall further.

“However, should the 2015-16 crop do better than initially forecast, we could very well see prices trending even lower,” it warns.