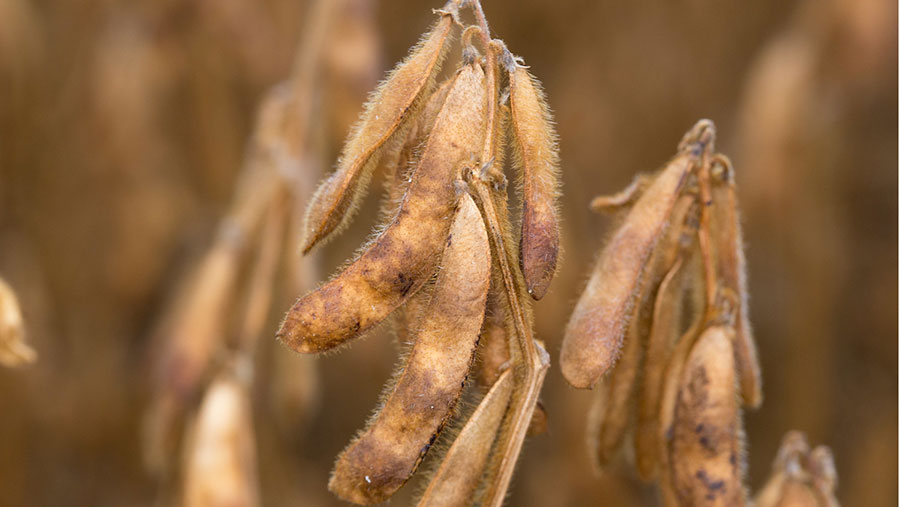 The area of soya is predicted to quadruple next year to more than 8,000ha as an increasing number of growers give the alternative spring break crop a chance to prove its mettle.

This season there is just 2,000ha in the ground ready for a late September harvest, but seed group Soya UK reports that many of their current 120 growers are looking to expand their crop area next year.

Interest in soya is booming as growers cast around for an oilseed rape replacement in cabbage stem flea beetle hotspots, or as an alternative spring crop to help with blackgrass control.

While the crop is being trialled largely in south-east England, growers as far west as Cornwall and Herefordshire are seeing how it stacks up.

The sun-loving legume, grown in drier climates in North and South America, as well as Eastern Europe, is not recommended to be grown further north than Cheshire, says Soya UK director David McNaughton.

Optimum planting time runs from 21 April to 25 May, with no yield penalty seen for later crops within that window, meaning plenty of time to create stale seed-beds to control blackgrass.

While it thrives best on lighter land, he says good results have been seen on heavier land with the seed going into moisture at a drilling depth of no more than 3cm.

If opting for ploughing, heavier ground is best worked in the autumn to preserve moisture in the spring and he cautions that going in early will achieve little, as the seed doesn’t germinate until soil temperatures hit 9C.

Once emerged, young plants are particularly vulnerable to pigeon attacks until past the cotyledon stage, when the leaves develop hairs, reducing their palatability.

However, if the establishment phase can be safely negotiated, the plant will throw out root nodules and be generating its own nitrogen by the end of June, doubling in size every three weeks until it reaches a mature height of about 1m. 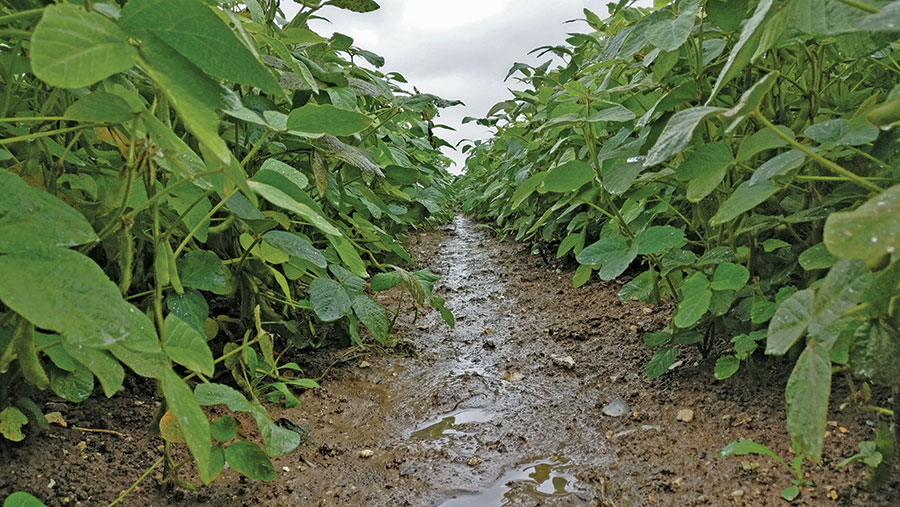 Will Parker, agronomist with advisory group Farmacy, has overseen the debut soya crop at Bassingbourne Farm, which is owned by his parents. 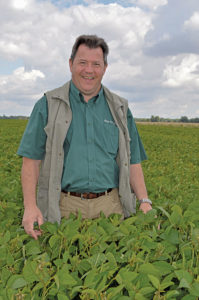 The 750ha farm, just over 10 miles south of Cambridge, decided to trial 20ha of the crop this year as an alternative break crop between potatoes and wheat, after slashing their oilseed rape area because of flea beetle attacks.

The farm, which already has a significant break crop area of peas, beans, and winter linseed, didn’t want to increase its pulse area because of price pressure and as they had found linseed challenging on their sandier land.

Mr Parker says he has found soya to be a low-maintenance crop so far with spraying limited to a pre-emergence herbicide around the 27 April drilling date followed by a split application of Pinnacle (thifensulfuron-methyl) on June 1 and 15.

Micronutrition was also applied as the crop’s rapid growth in June leaves it short of manganese and magnesium in particular.

Mr McNaughton said the plants will hit senescence by mid-September, when a diquat desiccant may be called for, depending on the season and weed burden.

Despite its late harvesting date, the crop is able to withstand a fair bit of wet and windy weather, he claims, having by this stage a fairly woody stem.

The hairy pods are also well suited to withstand getting wet, as they are clustered mostly at the top of the plant, and hang upside down meaning water will mostly run off.

The crop first arrived on UK shores as a serious contender in 2002, but dwindled from 1,200ha back to zero after prices of £165/t on maximum yields of 2.5t/ha meant it couldn’t compete against other break crops.

However, since China entered the world soya market in 2007 to support the growth of their meat sector, prices marched up to a record high of £560/t and stand at about £380/t.

The country is now the world’s largest importer, gobbling up 85m tonnes of the 150m tonnes traded annually on world markets.

And while UK imports of 3m tonnes are small by comparison, this presents a “huge and ready market” for UK growers which is unlikely to ever be completely fulfilled by home-grown produce, says Mr McNaughton.

“The soya market is almost unique in being high volume, high value, and not picky,” he says, explaining that less-than-perfect looking samples are not likely to be significantly penalised as animal feed sector is unconcerned with appearance.