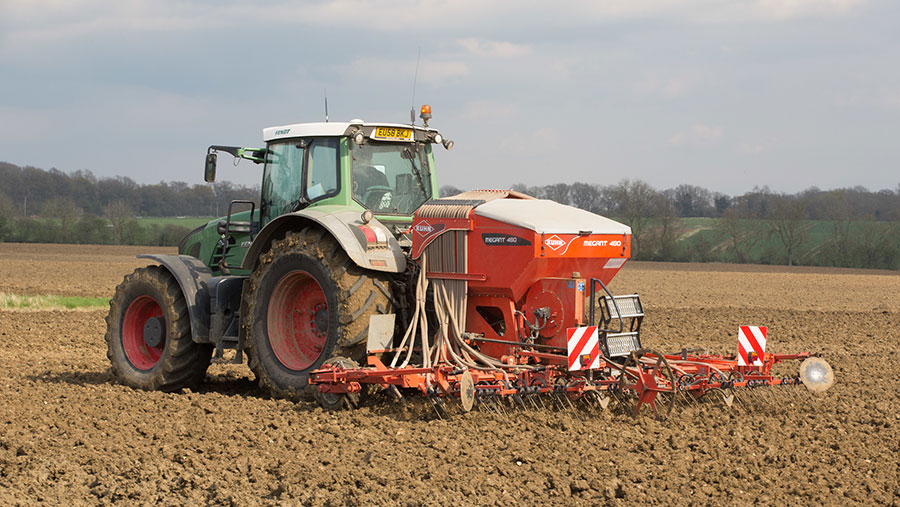 Arable growers are continuing to shift from winter- to spring-sown barley varieties, according to the final results of AHDB’s 2018 annual crop survey.

The Early Bird Survey of cropping intentions for harvest 2018 covers 500,000ha across the UK to predict a national planting figure.

The results are compared with Defra’s June crop survey 2017 to show what differences and trends are emerging in arable growers’ plans for this year’s harvest.

The overall results for Britain show the winter barley area is expected to have fallen by 9% from 423,000ha in the Defra data for 2017, to a forecast 383,000ha in the autumn Early Bird Survey.

AHDB analyst Daniel Rooney explained a major driver for the swing was a period of prolonged bad weather at sowing time in the autumn.

“The biggest changes have been seen in Scotland and the more northern areas of England where wetter weather tended to hamper winter drilling,” Mr Rooney said.

For the two largest English production regions for the crop, the East and Yorkshire and Humberside, the winter barley area is estimated to fall by 13% and 8% respectively, according to the AHDB figures.

But in Scotland, where some areas experienced the wettest weather on record last summer and autumn, winter barley plantings fell by a quarter to just 36,000ha.

The north-western and north-eastern regions of England showed the largest percentage rise in spring barley planting of 38% albeit from a low base of 40,000ha in 2017.

The survey results for wheat and oilseed rape were also released but spring versus winter plantings were not compared. However, there were marked changes between regions and when comparisons were made against the year-earlier figures.

Mr Rooney said the increase came on the back of a particularly low planting level in 2016 which led to the reduced harvest area last year.

“Cabbage stem flea beetle populations were particularly high in 2016 so growers avoided drilling it for the 2017 harvest.

“However, at drilling time for harvest 2018 the pest level had declined. Those growers that left out OSR the previous year had space in the rotation to bring it back in, resulting in the big increase we are seeing in the survey,” he explained.

For wheat, the overall change is expected to be a decline of about 2% from 1.8mha to 1.75m hectares.

The main reductions were in Scotland and the north west of England which fell by 10%, again driven by bad weather at drilling. The East and West Midlands offset those declines with a 2-3% increase in areas sown. The West Midlands showed a rise from 260,000ha to 164,000ha and in the east of the region, the area rose from 325,000ha to 334,000ha.

What is the Early Bird Survey?

The Early Bird Survey is carried out for the AHDB between late October and early November and estimates national cropping intentions.

The survey is conducted by Andersons Centre supported by the Association of Independent Crop Consultants and other agronomists.

For the latest survey, 60 agronomists gathered data from almost 500,000ha of arable land across all regions of Great Britain to create a forecast for the whole of the country.

The survey asks what area has been planted and what the intentions are for any land earmarked for planting for the following harvest.