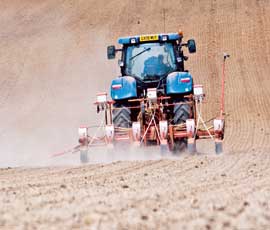 There has been a strong swing towards winter cereals and oilseed rape for the 2011-12 season, at the expense of spring crops and pulses, a survey has revealed.

The “early bird” survey of GB planting intentions by the Andersons Centre for AHDB forecast a “prominent rise” in oilseed area, with rape sowings up by 53,000ha (7%) to 758,000ha. The survey, based on a snapshot of agronomists’ field records, predicted wheat area would be similar to last year at 1.97m ha, while winter barley area was set to rise almost 5% to 375,000ha. This was largely at the expense of spring barley, which was forecast to see a fall in area of 6% to 573,000ha.

“While malting premiums are currently good, winter crop planting conditions have also been favourable,” Imogen Goatman of the Andersons Centre said. “The presence of good seed-bed conditions has encouraged farmers to plant more autumn-sown crops rather than leave land for spring cropping.”

The biggest loser was likely to be pulses. A 22% slump in the pea and bean area was forecast as growers switched to crops that offered more attractive gross margins. At 121,000ha, the pulses area would be around half the area grown in 2009.

The area of arable fallow land was predicted 12% lower than last year, at 137,000ha, the lowest since compulsory set-aside was removed.

• It has been a relatively quiet week for grain markets, despite the release of several crop reports. January 2012 futures were at £150/t as Farmers Weekly went to press on Wednesday (9 November), down slightly on the day, but up about £1/t on the week. November 2012 lost ground slightly at £144/t, but was up a similar amount on the week.