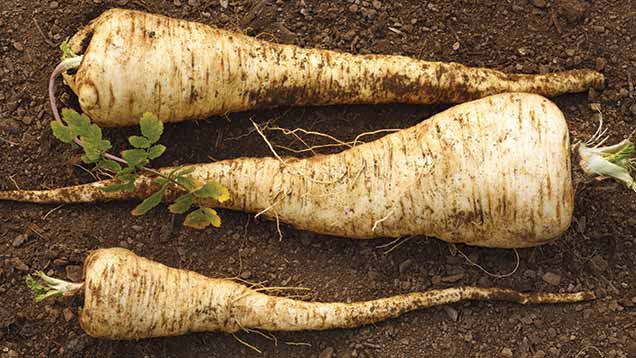 Demand for parsnips has traditionally been driven by its role in the Great British roast dinner, but a diversifying market is opening up opportunities and leading some to predict a bright future for the crop.

Those opportunities include processing uses such parsnip crisps, frozen roast parsnips and baby food. There is also a growing export market as our European neighbours develop a taste for the sweet-tasting vegetable.

See also: How to grow a successful carrot crop

But despite the potential opportunities, it is becoming an increasingly challenging crop to produce amid the familiar climate of pesticide losses.

Providing agronomy advice on 1,850ha is Vegetable Consultancy Services (UK), and its root veg specialist Tom Will says the reduced chemical armoury means a much more hands-on and focused approach is required.

“The crop needs a considerable amount of pre-planning and most aspects of crop protection and nutrition are laid out ahead of the season,” he explains.

Part of the umbelliferae family that includes carrots, celeriac and coriander, the crop is sown at various times throughout the year to ensure a steady supply.

Early crops are typically drilled in mid-November for a mid-June harvest, January/February for an early July harvest and March for an August or September harvest.

Maincrop varieties are drilled April to May and covered, usually with straw, to meet winter demand – which peaks at Christmas time.

“Variety choice is dominated by Javelin and Palace for maincrop and Gladiator for earlies, but breeding has really gone up a gear in recent years and there are now some new hybrids coming through,” says Mr Will.

Lighter, free-draining soils are preferable, but the crop can tolerate more bodied land than carrots, which suffer root stunting on heavier land.

Land preparation is the same as for potatoes. Primed, pelleted and treated seed – similar to sugar beet – is drilled into 20cm deep and 1.83-2m-wide beds in four rows of twin lines, with seed spacing manipulated to meet market specification.

“The fresh market demands smooth and straight roots, so beds need to be good quality. Precision vacuum drills are used and seed rates can be up to 500,000 seeds/ha for maincrop varieties,” explains Mr Will.

Carrot fly is the crop’s major pest and causes mining of the roots – leaving brown or black scars – and leads to considerable quality loss.

His company uses traps and many years of experience to be as targeted as possible.

Aphids, such as the willow-carrot aphid, are also monitored and treated with insecticide when colonies build in the crop to reduce the spread of various viruses, including parsnip yellow fleck virus.

“Other pests include cutworm, wireworm, chafer grubs and leatherjackets. These are on the rise due to the loss of key insecticides, but are fairly localised,” says Mr Will.

The main disease concerns in parsnips are two that hit quality – cavity spot and parsnip canker. The adoption of washed seed in combination with Wakil (cymoxanil + fludioxonil + metalaxyl-M) seed treatment minimises both seed-borne canker and pythium (damping off and cavity spot).

Little-and-often nutrition to keep the crop healthy and careful irrigation to ensure soils don’t become too wet will help keep the two profit-slashing diseases out.

“If the disease pressure is there, we will use a protectant fungicide spray early on and follow that up with further targeted sprays if necessary,” says Mr Will.

Active ingredients are rotated for resistance management, and new nozzle technology adopted to optimise efficacy. Disease control is one area where the product armoury remains adequate.

“There’s a new fungicide coming through soon that has performed well in trials, so we are well placed.”

Parsnip growers are not so well placed when it comes to controlling weeds after the loss or restrictions of key actives and this has led to a much more integrated approach.

There is a reliance on predominantly residual herbicides, which has prompted a move to band spraying using both selective and non-selective herbicides such as glyphosate.

“We also use brush weeders at the one-leaf stage to tickle small weeds out of the crop, followed by two later passes with mechanical hoes. We finish with a broadacre herbicide application,” adds Mr Will.

Typical yield is about 50t/ha, but can range between 40-60t/ha, and this year production costs for July-harvested crop are expected to be in the region of £4,650/ha.

Fresh farmgate prices are about £200/t for early crops, £125/t for maincrop and £230/t for strawed crops. “These prices vary considerably depending on supply and last season all prices were significantly below the cost of production.”

Parsnips fit nicely into OW Wortley’s rotation and irrigation schedule, so the crop has kept its place on the farm for the foreseeable future.

Based on the edge of Thetford Forest, managing director Andy Wortley says the area of ‘snips has gone up and down on the farm, but this season it’s about 80ha and mostly grown under contract for processing.

There has been a dramatic fall in packers of fresh parsnips in the local area, with two or three huge grower/packers now dominant, so the farm moved away from the fresh market.

“We used to get a very good price for washed parsnips, but its getting more challenging to make a profit now and with the loss of chemistry it’s hard to produce a blemish free crop.

“We now produce for the frozen market, helped by the unstoppable trend towards convenience food,” says Mr Wortley.

His early crop is drilled in November or December, covered in plastic and harvested in June and July, with yields typically about 45t/ha.

The harvested crop goes to a local processor, who top and tails and chops the roots into oven-ready pieces and sends them on to be frozen and packed.

“The contract is good for us, providing a secure outlet for an crop expensive to grow, in a volatile market. It would be a difficult crop to get into unless you have a guaranteed customer in place,” adds Mr Wortley.