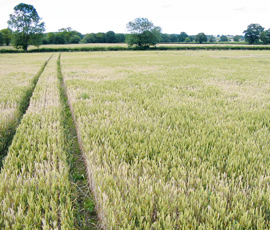 Wheat growers could boost yields by up to 2.5t/ha by drilling specific varieties that are more resistant to take-all disease.

Rothamsted Research has identified which older wheat varieties resist take-all the best and are looking for farmers’ help to assess newer varieties.

Researcher Vanessa McMillan says the key is which variety is grown as a first wheat, as it influences the yield of a following wheat.

“We have found there is a big difference in which variety you grow as a first wheat on the yield of the succeeding second wheat,” says Dr McMillan.

Take-all is a fungal pathogen that exists naturally in the soil and builds up in long runs of cereals. It causes yield declines in second and succeeding wheats.

This work is part of Rothamsted’s 20:20 wheat project, which started last year to try and raise top wheat yields to 20t/ha in the next 20 years.

In trials at Rothamsted with older varieties, Dr McMillan says the variety Cadenza resists the build up of take-all better than Hereward.

In a dry, low take-all year, like 2011, there was only a 0.2t/ha advantage in growing Cadenza as the first wheat.

Now Dr McMillan wants to find out how modern varieties affect take-all build up, and volunteer wheat growers are being sought for a two-year trial on-farm.

In the first year of the trial, a field would be divided in half and sown to two different varieties taken from two lists of varieties given by Rothamsted.

In year two, any variety can be sown and the grower simply needs to keep track of take-all levels and yields across the field.

Dr McMillan says fields should be at least 1ha, the previous crop should not be a cereal and the land should not suffer from serious problems with grassweeds.